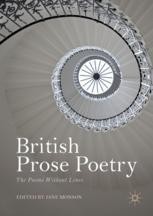 The Poems Without Lines

This book is the first collection of essays on the British prose poem. With essays by leading academics, critics and practitioners, the book traces the British prose poem’s unsettled history and reception in the UK as well as its recent popularity. The essays cover the nineteenth, twentieth and twenty-first centuries exploring why this form is particularly suited to the modern age and yet can still be problematic for publishers, booksellers and scholars. Refreshing perspectives are given on the Romantics, Modernists and Post-Modernists, among them Woolf, Beckett and Eliot as well as more recent poets like Seamus Heaney, Geoffrey Hill, Claudia Rankine, Jeremy Over and Vahni Capildeo. British Prose Poetry moves from a contextual overview of the genre’s early volatile and fluctuating status, through to crucial examples of prose poetry written by established Modernist, surrealist and contemporary writers. Key questions around boundaries are discussed more generally in terms of race, class and gender. The British prose poem’s international heritage, influences and influence are explored throughout as an intrinsic part of its current renaissance.

Jane Monson is a Mentor at the University of Cambridge, UK. She was previously Associate Lecturer in Creative Writing at Anglia Ruskin University, UK. She is the editor of This Line is not for Turning (2011), an anthology of contemporary British prose poetry. Her poetry collections include Speaking Without Tongues (2010) and The Shared Surface (2013).

“These intelligent essays and Jane Monson’s clearly-stated preface succeed in situating this sometimes gravely overlooked genre, with its attendant problems and triumphs, both historically and presently.” (Mary Ann Caws,  Distinguished Professor Emerita of English, French, and Comparative Literature at the Graduate School of the City University of New York, USA)

“The prose poem, once narrowly defined as ‘a composition able to have any or all features of the lyric, except that it is put on the page as prose,’ has had an astonishing rebirth in recent decades, as the new non-linear poetries have come to play a major role in the ongoing dialogue between lyric poetry and a host of other literary and non-literary forms.  This is the first collection to focus specifically on the British prose poem—its derivations, theoretical foundations, and its modernist and contemporary incarnations.   In this genuinely ground-breaking study, leading scholars provide engaging discussions of prose poetry from Joyce, Woolf, and Beckett to such contemporaries as Vahni Capildeo Jeremy Over, and Mark Ford.  British Prose Poetry will erode your conceptions of what a ‘poem’ is and how poetry functions in our current moment.”(Marjorie Perloff, Professor Emerita of English, Stanford University, USA)

“British Prose Poetry: The Poems Without Lines is a momentous and unparalleled book of essays that maps the elusive magnificence of the prose poem in Britain from the nineteenth century, to the present day. In a field dominated by American scholarship and anthologies, Monson reclaims the critical and creative space for British prose poetry by bringing together a stellar group of writers who are inextricably connected to the form. Challenging the notion of the prose poem as avant-garde or rebellious, this book celebrates its resurgence as a natural extension of the form’s ability to evolve and maintain its relevance. This is a landmark work – for British prose poetry and the prose poem internationally. If Russell Edson is the “godfather of the prose poem”, Monson is its fairy godmother, shining a light on its British narrative and contemporary renaissance.” (Cassandra Atherton, Associate Professor of Writing and Literature, Deakin University, Australia)