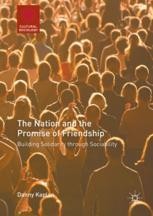 The Nation and the Promise of Friendship

When strangers meet in social clubs, watch reality television, or interact on Facebook, they contribute to the social glue of mass society—not because they promote civic engagement or democracy, but because they enact the sacred promise of friendship. Where most theories of nationalism focus on issues of collective identity formation, Kaplan’s novel framework turns attention to compatriots’ experience of solidarity and how it builds on interpersonal ties and performances of public intimacy. Combining critical analyses of contemporary theories of nationalism, civil society, and politics of friendship with in-depth empirical case studies of social club sociability, Kaplan ultimately shows that strangers-turned-friends acquire symbolic, male-centered meaning and generate feelings of national solidarity.

Danny Kaplan is Professor in the Department of Sociology and Anthropology and directs the Men Studies center at the Gender Program at Bar Ilan University, Israel. Kaplan specializes in the study of solidarity through the prism of friendship and mediated sociability. He is the author of The Men We Loved: Male Friendship and Nationalism in Israeli Culture (2006).

“The book will be attractive not only to sociologists and scholars of nationalism but also to those who are interested in the political implications of performances of public intimacy and in the formation of a civic space.” (Hizky Shoham, Nations and Nationalism, Vol. 26 (1), 2020)

“As Danny Kaplan shows in this important book, the centrality of sociability and solidarity to the life of modern nations is a crucial dimension in how nations figure in both politics and public life. Moreover, the ways nations figure in personal life shapes both their power and how nationalists mobilize followers.” (Craig Calhoun, President of the Berggruen Institute and Centennial Professor of Sociology, London School of Economics, UK)

“A vital contribution for those who believe that nationalism and patriotism grow out of the commitments made in interaction. States are not only structures, but, as Kaplan persuasively demonstrates, they are arenas of action. While an important theoretical advance in itself, his detailed analysis of scenes as diverse as Freemasonry, military friendships, and the show Big Brother demonstrate how friendship is a building block for patriotism and communal affiliation.” (Gary Alan Fine, Northwestern University, USA, and author of Tiny Publics)