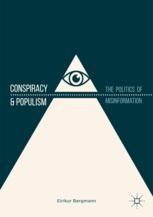 The Politics of Misinformation

Europeans are being replaced by foreign invaders, aided by cultural Marxists who are plotting an Islamist subversion of the continent. The Bilderberg group – and/or the Illuminati – are instating a totalitarian New World Order. Angela Merkel is the secret daughter of Adolf Hitler, Barack Obama was illegitimate, and George W. Bush was in on the 9/11 attacks. Also, the Holocaust is a hoax, members of Pussy Riot are agents of the West, and the European Union is resurrecting the Roman Empire, this time as a communist super-state. These are some of the tales that are told by populist political actors across Europe, were raised during the Brexit debate in the UK, and have been promoted by presidents of both the US and Russia. Rapid rise of populist political parties around Europe and across the Atlantic in the early new millennium coincided with the simultaneous increased spread of conspiracy theories. This book entangles the two tropes and maps how right-wing populists apply conspiracy theories to advance their politics and support for their parties.

Eirikur Bergmann is Professor of Politics at Bifrost University, Iceland, and Director of its Centre for European Studies. He is the author of eight academic books and three novels. He is a frequent commentator in the media on politics and European affairs.

“Conspiracy and Populism: The Politics of Misinformation, Eirikur Bergmann, goes beyond the United States to track belief in conspiracy thinking globally. … [It] provides considerable summary of important political conspiracies as well as innovative and compelling theses to explain their popularity, their functions, and their dangers. Anyone who is interested in or working on contemporary political conspiracies will want to read [this book]. It will also be of interest to anyone trying to understand the global rise of the populist right in historical context.” (Judith Grant, New Political Science, June 28, 2019)

“Conspiracy & Populism enters into dialogue with political science, communication studies and psychology. It offers a comprehensive introduction to the study of CTs, their links to populism and their potential impact on traditional political processes. Thanks to its interdisciplinary approach and its competent review of the literature, Bergmann’s work will prove particularly useful to students and early career researchers interested in taking populism and CTs seriously.” (Tatiana Coutto, The International Spectator, Vol. 54 (2), 2019)

“Recent decades have seen a disturbing convergence of populism and conspiracy theory. The populist rhetoric of conspiracy theory has found a home in the White House and the Kremlin, and fears of an Islamist conspiracy to take over Europe have played into Brexit and the rise of the nationalist populism in France and elsewhere. Bergmann’s timely book provides a clear and readable analysis of how and why populism and conspiracy are connected, and what this means for politics today.” (Professor Peter Knight, The University of Manchester, UK)

“The close connection between populism and conspiracy theory has often been observed but never systematically explored. Eirikur Bergmann’s important book closes this gap, as it puts the relationship centre stage for the first time. It will thus shape the debate on both phenomena for some time to come.” (Professor Michael Butter, University of Tübingen, Germany)