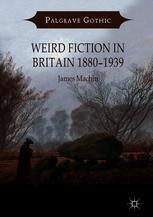 This book is the first study of how ‘weird fiction’ emerged from Victorian supernatural literature, abandoning the more conventional Gothic horrors of the past for the contemporary weird tale. It investigates the careers and fiction of a range of the British writers who inspired H. P. Lovecraft, such as Arthur Machen, M. P. Shiel, and John Buchan, to shed light on the tensions between ‘literary’ and ‘genre’ fiction that continue to this day. Weird Fiction in Britain 1880–1939 focuses on the key literary and cultural contexts of weird fiction of the period, including Decadence, paganism, and the occult, and discusses how these later impacted on the seminal American pulp magazine Weird Tales. This ground-breaking book will appeal to scholars of weird, horror and Gothic fiction, genre studies, Decadence, popular fiction, the occult, and Fin-de-Siècle cultural history.

James Machin is a visiting lecturer at the Royal College of Art, UK.

“Weird Fiction in Britain is certainly worth reading for any fan or student of the weird/gothic tale of the 19th century, as the mass of detail that went into this study is overwhelming, … .” (A. Ebert, popcultureshelf.com, March 29, 2019)

“A compelling argument for the consideration of the weird as a major literary mode. Though it focuses on the late-Victorian and Modernist period, Machin’s study ranges from the eighteenth-century origins of the weird to its continued popularity today. Machin surprises and delights with provocative insights and analyses, manoeuvring dextrously across the fields of canonical, popular, minor, and cult fiction. Weird Fiction in Britain 1880-1939 represents an important and transformational contribution to the scholarly fields of fin-de-siècle literature and pulp fiction.” (Kirsten MacLeod, Newcastle University, UK)

“Weird Fiction in Britain 1880–1939 is a book of groundbreaking importance for the study of the Weird in literature and culture: the first study to look comprehensively at the British context, and an invaluable account of the crucial continuities between the cultures of fin-de-siècle decadence and the Lovecraft/Weird Tales first heyday of the mode. James Machin's accounts of, in particular, Machen, M. P. Shiel, and Buchan are masterful and the book as a whole is filled with fascinating and illuminating material. Nobody interested in this topic can ignore this book's larger argument.” (Adam Roberts, Royal Holloway, University of London, UK)