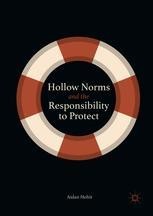 Hollow Norms and the Responsibility to Protect

This book explains why there is a pronounced disjuncture between R2P's habitual invocation and its actual influence, and why it will not make the transformative progress its proponents claim.  Rather than disputing that R2P is a norm, or declaring that norms are insignificant, Hehir engages with post-positivist constructivist accounts on the role of norms to demonstrate first, that the efficacy of a norm is not directly related to the extent to which it is proliferated or invoked, and second, that in the post-institutionalization phase, norms undergo both contestation and (potentially regressive) reinterpretation. This volume analyses the evolution of R2P, and demonstrates that it has been steadily circumscribed and co-opted, so that today it has no power to meaningfully influence the behaviour of states. It is essential reading for academic audiences in the disciplines of International Relations and International Law.

“The overwhelming majority of Security Council resolutions which mention R2P have referred exclusively to the host state’s primary responsibility to protect human rights and thereby reinforced R2P’s state-centrism and conservatism. … the most fascinating element of the book, … is that it exposes the problematic and even counterproductive nature of R2P’s progress and the consensus that has been created around the norm.” (Christof Royer, Journal of Intervention and Statebuilding, April 26, 2019)

"The Responsibility to Protect continues to gain rhetorical international support, at the same time that human rights are being increasingly compromised and atrocities across the world abound. Aidan Hehir not only calls out this radical juxtaposition, he explains exactly how it has come to pass. As a hollow, malleable norm that has been co-opted for strategic purposes by states, R2P has actually entrenched more conservative outcomes than its progressive advocates acknowledge. Hehir’s is a trenchant, organized, sharp, accessible, and ultimately devastating argument for the enormous gap between R2P celebratory invocation, and its (in)efficacy.” (Brent Steel, Professor, University of Utah, USA)
“An urgent call to re-evaluate triumphalism about the efficacy of the Responsibility to Protect norm. Hehir, one of the world’s leading scholars of the history, politics and impact of R2P, demonstrates that frequent invocation of R2P does not lead to effective action in limiting the kinds of suffering the norm was established to confront. It challenges a great deal of contemporary wisdom on humanitarianism, but is motivated by Hehir’s commitment to human rights, meaning the analysis is humane and eventually optimistic as well as excoriating of state and civil society failures. An essential read for all who wonder how so much suffering can exist in a world so full of norms which should compel states to protect populations.” (Kirsten Ainley, Assisant Professor, LSE, UK)

“In his provocative book, Aidan Hehir boldly declares that ‘R2P cannot work.’ He measures the claims that the responsibility to protect has made ‘progress’ against the reality of declining protection of human rights globally, and finds the former wanting. While his conclusions will be challenging - indeed dismaying - to supporters of greater protection of human rights, his ‘relentless scepticism' is essential reading for those who wish to realistically chart a way forward to better human rights protection and the prevention of atrocities around the world.” (Kurt Mills, Professor, University of Dundee, UK)

“Hehir’s central contention that the Responsibility to Protect (R2P) is a ‘hollow norm’, the ‘inherent malleability’ of which makes it vulnerable to ‘mendacious invocation’ is a typically provocative argument from an author who has, more than most participants in the debate over R2P, sought to swim against the prevailing tide by questioning the norm’s effectiveness in changing how we respond to mass atrocity crimes.  Acknowledging that the language of R2P has now entered the mainstream of diplomatic discourse, Hehir laments – and at times lambasts – what he sees as the ‘focus on the quantity of support for R2P rather than quality of this support’, arguing that the ultimate judgement on R2P must be based on the effect it has had on the ground in terms of reducing human suffering rather than the repetitions of support that it has received in the hallowed halls in which the world’s diplomats congregate.” (Justin Morris, Senior Lecturer, University of Hull, UK)

“With his new book, Hehir makes a provocative contribution to the ever-growing literature on the Responsibility to Protect. He challenges arguments by proponents of R2P’s efficacy, and convincingly critiques the real impact of R2P on states’ behaviour by showing the discrepancy between the positive normative development of R2P and its implementation. It is a thought-provoking read for not only academic readership but also practitioners.” (Pınar Gözen Ercan, Faculty, Hacettepe University, Turkey)