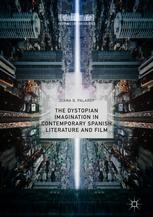 The Dystopian Imagination in Contemporary Spanish Literature and Film

This study examines contemporary Spanish dystopian literature and films (in)directly related to the 2008 financial crisis from an urban cultural studies perspective. It explores culturally-charged landscapes that effectively convey the zeitgeist and reveal deep-rooted anxieties about issues such as globalization, consumerism, immigration, speculation, precarity, and political resistance (particularly by Indignados [Indignant Ones] from the 15-M Movement). The book loosely traces the trajectory of the crisis, with the first part looking at texts that underscore some of the behaviors that indirectly contributed to the crisis, and the remaining chapters focusing on works that directly examine the crisis and its aftermath. This close reading of texts and films by Ray Loriga, Elia Barceló, Ion de Sosa, José Ardillo, David Llorente, Eduardo Vaquerizo, and Ricardo Menéndez Salmón offers insights into the creative ways that these authors and directors use spatial constructions to capture the dystopian imagination.

“This is a penetrating study of a fast-growing, increasingly topical genre which reflects the malaise of contemporary Spain and the wider world. Concentrating on the period since the 2008 financial crisis, Palardy surveys the most important instances of dystopian expression, and gives a lively sense of the dominant themes which have emerged. This is also an excellent starting-point for anyone interested in comparative dystopian literary studies.” (Gregory Claeys, Royal Holloway, University of London, UK)

“We needed Diana Q Palardy’s book. Her investigation has all the features of a good study; it is rigorous, eclectic, and stimulating, with a clear-headed theoretical base applied wisely to particular novels. She also clarifies and develops an essential subject of our time that is in most urgent need of critical inquiry. She provides Spanish readers, novelists and essayists with a place from which we can move forward.” (Fernando Ángel Moreno, Universidad Complutense de Madrid, Spain)

“Palardy’s book is an invaluable contribution to the study on how the 2008 Great Recession has been reflected in the literature of Spain, one of the countries worst hit by the latest economic crisis and the subsequent austerity measures. This crisis has brought about a high number of dystopias (both filmic and literary) denouncing the crisis and its causes, as well as speculating about its present and anticipated social and human costs. Some representative examples are discussed in an illuminating way not only for Spain, but for any other country having suffered the same ordeal. In doing this, the author has produced a highly accurate and readable account showing how dystopian texts can transcend local and temporary circumstances to have universal appeal, especially considering that dystopia is now a significant mode of fiction, in Spain and elsewhere.” (Mariano Martín Rodríguez, HISTOPIA)