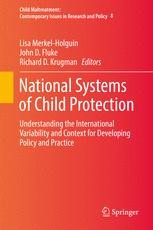 Understanding the International Variability and Context for Developing Policy and Practice

This volume provides a wide spectrum description analysis of the contemporary and well established child protection systems in a range of countries, such as Australia, Canada, Netherlands and Spain. It presents a brief orientation about the public and private systems involved in protecting children in each country. Further the book identifies current key policy and implementation drivers that orient the systems of child protection, such as children’s rights, family preservation, use of evidence and public health orientation. Finally it presents a critical analysis of the strengths and limitations of the systems, as well as, strategies for prospects for improving outcomes for children and their families.

Lisa A. Merkel-Holguin, MSW, is an Assistant Research Professor at the University of Colorado School of Medicine, Kempe Center for Prevention and Treatment of Child Abuse and Neglect, and Director of the National Center on Family Group Decision Making. She has over 25 years of experience in identifying, developing, and implementing innovative reforms into child welfare systems, particularly in areas of child safety and permanency. Two of the most prominent reforms she is involved in are family group decision making and differential response, both which humanize the child welfare system, and give service providers the opportunity to build helping relationships with the families who involuntarily make it into this system. She also competently transfers research and evaluation findings into child welfare practice with national and international implications. With her expertise in implementation and capacity building, she has supported the installation of numerous evidence-based and -informed innovations in child welfare agencies in over 40 States and a number of Canadian provinces. As a principal investigator and senior research analyst, she has led numerous impactful evaluations in child welfare studying the impacts of different types of family meetings, child abuse prevention programs, and differential response in child protective services. She is also the Implementation Director for the newly established Quality Improvement Center for Workforce Development that is charged for working with child welfare agencies to implement and test workforce improvement interventions. She holds an MSW from the University of Illinois Champaign-Urbana.

John D. Fluke Ph.D., is Associate Director for Systems Research and Evaluation at the Kempe Center and Research Professor in the Department of Pediatrics at the University of Colorado School Of Medicine with a joint Research Professor appointment at the Department of Epidemiology at the Colorado School of Public Health. Dr. Fluke’s research is focused on the behavioral economics of child protection decision-making and child maltreatment epidemiology. A key emphasis has been on developing and testing theoretical frameworks in child welfare decision making. He played a major role in developing some of the earliest child maltreatment epidemiological studies in the US. By extending this work to other countries he has contributed to the development of the epidemiological infrastructure and the emergence of epidemiological research on a global basis. To that end he has worked with data collection programs in the Balkans, Canada, Saudi Arabia, the US, and for UNICEF. He has served as PI on a number of large federal and state research and evaluation initiatives including research funded by several US government agencies. Other work has included child welfare program evaluation contracts for states such as Colorado, New York City, Utah, and Texas, as well as, research for the Public Health Agency of Canada, UNICEF, and research grants from private foundations such as the Annie E. Casey Foundation.

As a research manager he has experience in directing research and evaluation projects focused on maltreatment surveillance data, children’s mental health, child protective service risk and safety assessment, expedited permanency, guardianship, family group decision making, trauma services, adoption, and screening.  The author or co-author of numerous scholarly publications, Dr. Fluke has presented papers at both national and international meetings and conferences.  He is a Scholar in Residence at the Graduate School of Social Work at the University of Denver, and status only faculty at the Factor—Inwentash Faculty of Social Work at the University of Toronto. He serves as a Councilor for the International Society for Child Abuse and Neglect (ISPCAN) and co-chair of the Working Group on Child Maltreatment Data Collection for ISPCAN. He holds a Ph.D. in Organizational Decision Science from Union Institute and Universities, an MA in Anthropology from the Pennsylvania State University, and a BA in Mathematical Anthropology from the University of Northern Colorado.

Richard D. Krugman, MD, is Distinguished Professor of Pediatrics at the University of Colorado School of Medicine based at the Kempe Center for the Prevention and Treatment of Child Abuse and Neglect, where he served as its Director from 1981-1992. He has authored over 100 original papers, chapters, editorials and four books and stepped down after 15 years as Editor-in-Chief of Child Abuse and Neglect: The International Journal in 2001.  He has gained international prominence in the field of child abuse and neglect and is the Co-Founder of the National Foundation to End Child Abuse and Neglect.  Dr. Krugman is a graduate of Princeton University and earned his medical degree at New York University School of Medicine. A board-certified pediatrician, he did his internship and residency in pediatrics at the University of Colorado School of Medicine. Following a two-year appointment in the early 1970s with the Public Health Service at the National Institutes of Health and the Food and Drug Administration, Dr. Krugman joined the CU faculty in 1973. He went back to the Washington area in 1980 as a Robert Wood Johnson Health Policy Fellow and served for a year as a legislative assistant in the office of U.S. Senator Dave Durenberger of Minnesota.

At CU, Dr. Krugman has held a variety of administrative positions including Vice Chancellor for Health Affairs (2007-2015), Dean of the CU School of Medicine (1990-2015) and vice chairman for clinical affairs, Department of Pediatrics (1985-1990). He has earned many honors in the field of child abuse and neglect and headed the U.S. Advisory Board of Child Abuse and neglect from 1988-1991. He was elected to the National Academy of Sciences in 2008.