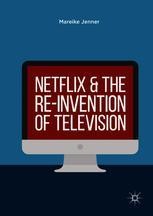 Netflix and the Re-invention of Television

This book deals with the various ways Netflix reconceptualises television as part of the process of TV IV. As television continues to undergo a myriad of significant changes, Netflix has proven itself to be the dominant force in this development, simultaneously driving a number of these changes and challenging television’s existing institutional structures. This comprehensive study explores the pre-history of Netflix, the role of binge-watching in its organisation and marketing, and Netflix’s position as a transnational broadcaster. It also examines different concepts of control and the role these play in the history of ancillary technologies, from the remote control to binge-watching as Netflix’s iteration of giving control to the viewers. By focusing on Netflix’s relationship with the linear television schedule, its negotiations of quality and marketing, as well as the way Netflix integrates into national media systems, Netflix and the Re-invention of Television illuminates the importance of Netflix’s role within the processes of TV IV.

Mareike Jenner is Lecturer in Media Studies at Anglia Ruskin University, UK. Her monograph American TV Detective Dramas was published by Palgrave in 2015. She has published on Video-on-Demand, genre and crime drama.

“Netflix & the Re-invention of Television provides lucid claims relevant to those who study television in a transnational, post-digital era. It also provides valuable syntheses of history and theory relevant to television’s evolution and intersection with larger political, economic and cultural discourses, particularly in regard to the role that US-based media conglomerates play in non-US contexts. … This is merely a starting point, however, towards considering the myriad ways in which television is being continually shaped, understood and re-invented.” (James M Elrod, Critical Studies in Television, Vol. 15 (1), 2020)

“Proceeding from a rich prehistory organised around a narrative of the shifting power of the viewer to control their experience, and carefully considering the transnational contexts involved, Mareike Jenner's account of Netflix is the most thoughtful and comprehensive analysis I have seen so far.” (Graeme Turner, University of Queensland, Australia)

“Ranging across the history of TV’s ancillary technologies of control, Mareike Jenner smartly contextualises views of Netflix as an industry disruptor. Netflix and the Re-invention of Television also contests corporate discourses, exploring the service’s links to linear TV. Complicating our understandings of binge-watching, algorithmic culture, and transnational television, this is an invaluable guide to the emergent era of “TV IV” and a brilliant contribution to the ever-growing, on-demand catalogue of key TV studies’ texts.” (Matt Hills, University of Huddersfield, UK)