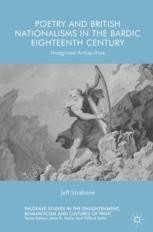 Poetry and British Nationalisms in the Bardic Eighteenth Century

This book offers a radical new theory of the role of poetry in the rise of cultural nationalism. With equal attention to England, Scotland, and Wales, the book takes an Archipelagic approach to the study of poetics, print media, and medievalism in the rise of British Romanticism. It tells the story of how poets and antiquarian editors in the British nations rediscovered forgotten archaic poetic texts and repurposed them as the foundation of a new concept of the nation, now imagined as a primarily cultural formation. It also draws on legal and ecclesiastical history in drawing a sharp contrast between early modern and Romantic antiquarianisms. Equally a work of literary criticism and history, the book offers provocative new theorizations of nationalism and Romanticism and new readings of major British poets, including Allan Ramsay, Thomas Gray, and Samuel Taylor Coleridge.

Jeff Strabone is Associate Professor of English at Connecticut College, USA, where he teaches the eighteenth century, British Romanticism, and African fiction. He received his PhD from New York University, USA.

“The book offers a compelling picture of a British romanticism defined by its ‘bardic narratives of literary history, new print editions of medieval poetry, and a new, Northern-oriented cultural nationalism in the British nations’ … .” (Sean Barry, The Coleridge Bulletin, Issue 55, 2020)

“The strengths of Poetry and British Nationalisms in the Bardic Eighteenth Century outweigh any absences. Its syntheses of recent work on nationalism, medieval reception, and eighteenth-century and Romantic editing and poetics have the potential to benefit scholars and students in a range of fields. ... it also highlights the need for continued examination of the interdisciplinary strategies of literary scholarship on the eighteenth century and Romantic era, it is an added benefit to a thoroughly valuable book.” (Dustin M. Frazier Wood, Journal of English and Germanic Philology, Vol. 119 (3), July, 2020)

“Strabone is at his best when he is recounting the elaborate tracing of textual affiliations among well-known and unknown poets alike that describe this historical shift. … For this reason, and for his comprehensive account of British bardism’s winding textual manifestations, Poetry and British Nationalisms in the Bardic Eighteenth Century will be read for many years to come.” (James Mulholland, Modern Philology, Vol. 117 (4), February 28, 2020)

“This is an impressive, subtle, and well-informed book that links the emergence of cultural nationalism in Scotland, Wales and England during the eighteenth century with the editing of archaic texts and the use of poetic metre. … the book is especially valuable for that reason. … This insightful and original book will have a significant influence on Romantic studies, most especially in its intelligent balancing of metrical and historical forms of knowledge.” (David Stewart, The BARS Review, Issue 53, 2019)

“Lively, insightful, and detailed, this study explores broad historiographic trends that focus on the dynamics of Wales, Scotland, and England as nations in the context of eighteenth-century Great Britain (and later the United Kingdom) as a sovereign state. The innovative and persuasive readings of specific poems and acts of publication underscore the crucial role writers, editors, and publishers played in imagining these vexed nations. … Strabone not only offers new insights about a variety of poems but suggests methods that might be applied to other genres." (Mark Schoenfield, The Wordsworth Circle, Vol. 50 (4), Fall, 2019)

“Strabone ferries us between the labors of poets, scholars (e.g., the Scottish Latinist and librarian Thomas Ruddiman), and editors (e.g., Alan Ramsay at work on the Bannatyne manuscript), as well as from the first Elizabethan recoveries of non-Anglo-Saxon literatures to Romantic-era adaptations of those literatures.” (Jayne Lewis, SEL Studies in English Literature 1500-1900, Vol. 59 (3), 2019)

“Strabone … has a talent for throwing out big ideas that are useful to think with. … Strabone’s readings of ‘Kubla Khan’, in which the poet’s vision becomes a literary-historical allegory about the development of European poetry, and ‘Christabel’, in which Strabone scans Coleridge’s lines to find supposedly archaic feet, are genuinely exciting: they should secure Coleridge the bardic credentials long-ago awarded to Wordsworth.” (Rhys Kaminski-Jones, The Review of English Studies, Vol. 70 (296), September, 2019)
“Strabone's inquiry is directed chiefly towards the outcomes for romanticism but his research among the work of some of the less well known antiquarians of the period, particularly those in Wales and Scotland, will be of interest to both the romanticist and medievalist. … Strabone's book is exemplary in both calling for and then practicing a genuinely Archipelagic understanding of British poetics in the period.” (David Matthews, The Medieval Review, May 20, 2019)