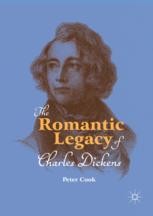 The Romantic Legacy of Charles Dickens

This book explores the relationship between Dickens and canonical Romantic authors: Blake, Wordsworth, Coleridge, Byron, Percy and Mary Shelley, and Keats.  Addressing a significant gap in Dickens studies, four topics are identified: Childhood, Time, Progress, and Outsiders, which together constitute the main aspects of Dickens’s debt to the Romantics. Through close readings of key Romantic texts, and eight of Dickens’s novels, Peter Cook investigates how Dickens utilizes Romantic tropes to express his responses to the exponential growth of post-revolutionary industrial, technological culture and its effects on personal life and relationships. In this close study of Dickensian Romanticism, Cook demonstrates the enduring relevance of Dickens and the Romantics to contemporary culture.

Peter Cook is Senior Lecturer at Anglia Ruskin University in Cambridge, UK. His publications cover a wide range of interests, from the Romantics to Ted Hughes.

“It is a pleasure to encounter a thoughtful, illuminating analysis of a familiar novel that offers a fresh and innovative perspective. ... The Romantic Legacy of Charles Dickens is Cook’s extensive research, presented in a way that is readable, accessible and clear, avoiding the pitfall of making the book sound like a doctoral dissertation. ... the book will ultimately create a fruitful legacy of its own among future scholars.” (Sara L. Pearson, Brontë Studies, Vol. 44 (4), October, 2019)

“Strengths of this study include its extensive close readings, attention to historical and cultural context, and identification of parallels between Romantic and Dickensian imagery. While the book will primarily be useful to literary scholars or humanists working on Dickens, it will also appeal to historians or scholars in cultural studies interested in the effects of indus­trialization, science, technology, modernity, and urbanization on the individual and society.” (Kristen Starkowski, Journal of Victorian Culture, March 14, 2019)

“Cook's elegant and illuminating study of Dickens's responses to his Romantic predecessors repairs a significant gap in Dickens scholarship. It will be read with pleasure and with profit by scholars and students alike.” (Richard Cronin, Professor of English Literature, University of Glasgow, UK)

“Although the significant influence on Dickens of the Romantics is often acknowledged in passing, Peter Cook fully demonstrates the need for more. He shows persuasively how a full examination of that influence illuminates the evolution of Dickens's critique of Utilitarian values. Painstakingly researched and elegantly written, this book will be read widely and with well deserved appreciation for its contribution to Dickens studies.” (Margaret Flanders Darby, Colgate University, USA)

“Peter Cook’s study of Dickens offers us fresh, nuanced, and insightful readings of Dickens’s anti-romantic claims and, paradoxical, commitment to the High Romantic ideals of Blake, Coleridge, Wordsworth, Byron, Keats, P.B. Shelley, and Mary Shelley. Stylistically, the authentication of Dickens’s Romantic inheritance and eventual bequest, as Cook persuasively shows, is affirmed by a commitment to poetic prose and symbol as a unifying structuring principle in Dickens’s writing. Cook’s original account of Dickens marks a timely critical intervention that will be of interest to scholars and students alike of the discrete, but inter-related, fields of study concerned with Romanticism, Victorianism, Romantic legacies, and the Long Nineteenth Century.” (Mark Sandy, Professor of English Studies, Durham University, UK)