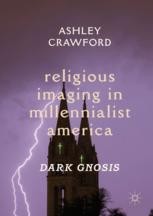 Ashley Crawford investigates how such figures as Ben Marcus, Matthew Barney, and David Lynch—among other artists, novelists, and film directors—utilize religious themes and images via Christianity, Judaism, and Mormonism to form essentially mutated variations of mainstream belief systems. He seeks to determine what drives contemporary artists to deliver implicitly religious imagery within a ‘secular’ context. Particularly, how religious heritage and language, and the mutations within those, have impacted American culture to partake in an aesthetic of apocalyptism that underwrites it.

Ashley Crawford is a freelance cultural critic based in Melbourne, Australia, and is the author of a number of books on Australian culture.

“Like the old prophets Ballard and Baudrillard, as well as Mark Dery and Slavoj Žižek (on a good day), Ashley Crawford practices cultural criticism as a high-low art of forensic pathology. Casting a scalpel-sharp eye on the enigmas of fleshy abjection in recent American literature, film, and art, Crawford then links this visceral weirdness to the apocalypse cultures of the recent and distant past. Along the way, Crawford convincingly argues that such epidermal eschatology is not so much a symptom of nihilism as a mutant expression of an American gnostic religion now gone feral and deranged.” (Erik Davis, author of Nomad Codes: Adventures in Modern Esoterica)

“With just the right balance of postmodern theory and pop intellectualism, Ashley Crawford explores the visions of apocalypse that were always there, in the night terrors of our New Jerusalem. Crossing the brio of his fellow Aussie Robert Hughes with an oracular style familiar from Baudrillard’s America, Crawford reveals American Christianity for the mutant thing it is: the dark side of the Enlightenment, haunted by gnostic strains and gothic tendencies. Dark Gnosis should take the place of every Gideons bible in every motel on Route 666.” (Mark Dery, author of I Must Not Think Bad Thoughts: Drive-By Essays on American Dread, American Dreams)

“Dark Gnosis takes us into the heart of America’s schizophrenic relationship with the apocalypse, the simultaneous fear and fascination with The End. Crawford’s thrilling analysis of end-time dreaming in the works of influential artists, writers and filmmakers shows how the religious imaginary remains integral to our cultural DNA.” (Margaret Wertheim, author of The Pearly Gates of Cyberspace and Physics on the Fringe.)