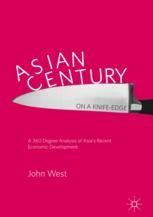 Asian Century… on a Knife-edge

This book is open access under a CC BY 4.0 license.
This book delves into the widely held belief that the 21st century will be the "Asian Century" by examining the Asia's rapid economic development in the post-war era and the challenges it faces in forging ahead of world leaders in the West.
The impact of the current turbulent global political climate on Asia is critically analyzed, employing a holistic and multidisciplinary approach, combining economic, social, political and geopolitical perspectives. Written in an accessible style, the book offers students, business, government, and civil society players powerful insights on Asia.

John West has had a long career in international economics and relations, with major stints at the Australian Treasury as director of balance of payments, OECD as head of public affairs and director OECD Forum, and Asian Development Bank Institute as senior consultant for capacity building and training. He also taught globalization at the Institut d'Etudes Politiques (Sciences Po) in Paris. John is now adjunct professor at Tokyo's Sophia University, contributing editor at FDI-Intelligence, a Financial Times magazine, and executive director of the Asian Century Institute.

“Properly referenced and detailed, West’s well-argued volume will appeal not just to serious economists and political scientists, but also to other readers with an interest in the major themes and currents of political and social debate in our region.” (Roger Coombs, Asian Century Institute, asiancenturyinstitute.com, December 25, 2018)

“The user friendly writing style, and good eye for relevant detail and anecdotes, drawn from his long-time observation of the Asian scene, makes the book useful and relevant to policymakers, researchers, academics, students, and those who are concerned about Asia’s future prospects. … The book succeeds in communicating Asia’s inter- related challenges, with insightful sketches of various challenges in Asia’s leading countries.” (Mukul Asher, MyIndMakers, myind.net, March, 2018)

“Not only is it an impressive comparative analysis, but it also provides a very valuable context for understanding the nature of development in any of the particular countries examined. Because of this it is essential reading for policymakers with exposure to the region.” (Seamus Grimes, chinaeconomicreview.com, February, 2018)

“John West has published a new book entitled ‘Asian Century’. It is a must-read for everybody who is anybody! … John West has written a very worthwhile book. His worldview, while very different from mine, is clearly expressed in a very readable fashion. I therefore recommend this book to everyone who is concerned about how the 21st century may progress.” (Frank Li, econintersect.com, February, 2018)

“West’s analysis is timely, insightful, and highly readable. Many recent studies have focused on specific problems, such as Asia’s yawning infrastructure gap and the implications of artificial intelligence and robotics. West paints with a much broader brush. He provides welcome coverage of the trampled rights of ethnic minorities, women, children, and the LGBT community.” (Robert Wihtol, the interpreter, lowyinstitute.org, February, 2018)