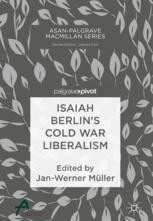 This book offers a succinct re-examination of Berlin’s Cold War liberalism, at a time when many observers worry about the emergence of a new Cold War. Two chapters look closely at Berlin’s liberalism in a Cold War context, one carefully analyses whether Berlin was offering a universal political theory – and argues that he did indeed (already at the time of the Cold War there were worries that Berlin was a kind of relativist). It will be of value for scholars of the cold war and of security issues in contemporary Asia, as well as students of history and philosophy.

Jan-Werner Müller is a professor of politics at Princeton University, where he also directs the Project in the History of Political Thought.  His previous books include What is Populism? (2016) and Contesting Democracy: Political Ideas in Twentieth-Century Europe (2011).  He writes for the Guardian, the London Review of Books, and The New York Review of Books.

​“Confronting a series of caricatures of Isaiah Berlin, three insightful scholars ponder his relevance for our own time. Was Berlin’s ‘Cold War liberalism’ also an attempt at relentless criticism of liberal complacency? Far from propounding a dogmatic liberalism, did Berlin not acknowledge, alongside a ‘moral minimum,” the necessity of political compromise? Whatever the answers, this book successfully redeems Berlin for continuing engagement in a new era.” (Samuel Moyn, Yale University, USA)

“As we settle into a new century of global conflict, the contours of the one just ended are snapping into focus. This volume casts fresh light on one of that century's most humanist observers: Isaiah Berlin. Through historical and philosophical exploration, the three authors here ask us to consider Berlin and his legacy anew, asking what he meant in his time, and what he might mean for us.” (James Chappel, Duke University, USA) “A very stimulating volume that places Berlin’s thought in the post-war context without reducing it to a mere expression of its time. The essays help us to see that it was as much Berlin's “untidy” exploration of political psychology as his principles that expressed the liberalism he cherished.” (Mark Lilla, Columbia University, New York, USA)