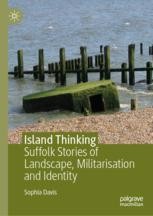 Island Thinking is a cultural historical and geographical study of Englishness in a key period of cultural transformation in mid-twentieth century Britain as the empire shrank back to its insular core. The book uses a highly regional focus to investigate the imaginative appeal of islands and boundedness, interweaving twentieth-century histories of militarisation, countryside, nature conservation and national heritage to create a thickly textured picture of landscape and history. Referred to as an ‘island within an island’, Suffolk's corner of England provides fascinating stories displaying a preoccupation with vulnerability and threat, refuge and safety. The book explores the portrayal of the region in mid-century rural writing that ‘rediscovered’ the countryside, as well as the area’s extensive militarisation during the Second World War. It examines various enclosures, from the wartime radar project to ‘make Britain an island again’ to the postwar establishment of secluded nature reserves protecting British birds.

Sophia Danielle Davis completed her Ph.D. at the University of Cambridge in the History and Philosophy of Science, and was subsequently a research scholar at the Max Planck Institute for the History of Science, Berlin.

“In this thoughtful and illuminating book, Sophia Davis asks us to consider the imaginative appeal of what it means to be an island. Taking in the view from the shores of the Suffolk coast, Island Thinking looks at how ideas of nationhood, identity, defence and nature become bound together in place. This book uncovers the stories of how this small, seemingly isolated part of England became significant to emerging national narratives about Englishness, its rural inheritance and its future military technological prowess.” (Rachel Woodward, Professor of Human Geography, School of Geography, Politics & Sociology, Newcastle University, UK, and author of Military Geographies)

“Sophia Davis’s Island Thinking offers a fascinating and compelling account of mid-twentieth-century Englishness, as seen through a rich archipelagic history of one of England’s most peculiar and most iconic counties, Suffolk. Davis leads the reader through the intensely local impacts and affects of profound historical and global change, and reads the landscape wisely and well for what it can tell us about the dramatic transformations of English culture through and after the Second World War.” (Professor John Brannigan, University College Dublin, and author of Archipelagic Modernism: Literature in the Irish and British Isles, 1890–1970)

“Through close scrutiny of Suffolk stories, Sophia Davis offers a compelling narrative of islandness in England from the mid-twentieth century. These accounts of landscape and militarisation, migration and the natural world, show how island thinking invokes both refuge and anxiety, security and fear. In looking back, Island Thinking captures ongoing English preoccupations.” (David Matless, Professor of Cultural Geography, University of Nottingham, and author of In the Nature of Landscape)

“Island Thinking expertly takes the reader into the secrets of the Suffolk countryside in a way that no other study has. Adeptly guiding the reader through the historical layers of its twentieth century landscape, Davis exposes the deeper roots of how the nation relates to itself, using Suffolk to trace the broader themes of isolation, defense, heritage, and nostalgia. Anyone with a fascination with the countryside will enjoy the way that the county’s traditions of silence and secrecy were punctuated by pioneering conservationists, returning avocets, ex-servicemen, and the rewilding of abandoned ruins. Beautifully researched and written, the reader can discover in Island Thinking a parable for our times as we seek an understanding of how this landscape has done so much to create a sense of ‘Englishness’. This superb scholarly researched study marks an invaluable new contribution to British landscape history.” (Michael Bravo, Director of the Scott Polar Research Institute, University of Cambridge)