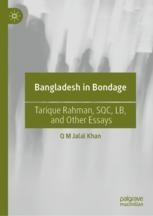 This book brings together a collection of essays about the untenable political status quo in Bangladesh under Sheikh Hasina. Since democratization in the 1990s, Bangladeshi political life has been characterized by fierce battles over the role of religion in society, corruption, and the obstacles to constructing a society with freedom of expression and rule of law, independent from the influence of powerful neighboring countries. Academic freedom and other human rights issues have hindered the study of Bangladesh heretofore, and corruption, police abuses, and election rigging are common as well as widely documented. In this passionate, sometimes personal exploration of the issues of social justice, rule of law, and the democratic process in Bangladesh, the book offers a valuable case study of how an Asian developmental state is otherwise regressing backwards morally, socially, and politically. The Bangladeshi struggle for sovereignty, prosperity and democracy documented in this book will be of interest to political scientists, scholars of South Asia, and those of Islam.

Dr Q M Jalal Khan is author of Bangladesh: Political and Literary Reflections on a Divided Country (New York: Peter Lang, 2018) and Bangladesh Divided: Political and Literary Reflections on a Corrupt Police and Prison State (New York: Peter Lang, 2019). His work, “Sheikh Hasina’s Brutal BNP-Phobia and Her Scandalous ‘Midnight’ Power Grab Through Vampire Vote Dacoity and Villainous ‘S/Election’ Rigging with an All-Time High Record of Humongous White-Collar Corruption” has appeared in Balland (ed), Bangladesh: A Suffering People Under State Terrorism (Peter Lang, 2020). His co-edited Begum Khaleda Zia: Portrait of a People's Leader of Bangladesh (Washington: Academica Press, November 2020) and India’s Hegemonic Design in Bangladesh (New Jersey: Writers Republic, January 2021) are among his more recent volumes. Forthcoming is his edited book on Bangladesh’s famed and fabulous former President Ziaur Rahman, Zia, the Legend of Bangladesh. American-educated Dr Khan’s numerous other publications in political commentary and literary criticism have appeared in various Western and Asian journals and online portals. After disengaging from many years of teaching abroad, he is currently on the adjunct faculty at an institution of higher learning in North America.

“A compelling, vivid account of the horrendous situation in Bangladesh, currently ruled by a ruthless fascist dictator. The author has narrated the story of systemic and complete destruction of a state in his multi-volume work. The unfortunate nation has been waiting for freedom from this mafia rule for more than a decade by any means--opposition-led mass revolt, people-army uprising, or a general election under a neutral national government or a UN-sponsored body. This particular work should remain as evidence of crime committed by a foreign power-imposed coterie of Islamophobic ruling class in a Muslim majority country in South Asia.” (Engr Mahmudur Rahman, MBA, Former Energy Advisor to the Government of Bangladesh, Writer, and Editor Amar Desh)

“This book, exactly in the tone and style of the author’s earlier publications, is about the one-person and one-party dictatorship of Sheikh Hasina in Bangladesh. There is no freedom of expression in the corruption-and-oppression-ridden police and prison state--a country under the threatening and frightening stare of state terrorism. It remains a deeply divided polity with the opposition, though hugely popular, completely cowed down by force. All international organizations, such as Amnesty International, Human Rights Watch, Transparency International, US State Dept Reports, BBC, Al Jazeera, Deutsche Welle and the millions of print, online, and social media posts and articles (outside the country) are in corroboration of the high-level loots and launderings, bribery and smuggling, massive election riggings, repression, discrimination, persecution, egregious human rights abuses and institutional collapse going on unabated in Bangladesh. In this India-backed country of fascist rule, there is hardly any social justice, rule of law, institutional integrity, and democratic process of peaceful transition of power through free and fair elections, which are all gone. By reflecting on some key figures, dead or alive, of opposition politics and analyzing some of the pressing issues facing the country, the book offers an interesting reading to many quarters.” (Dr Taj Hashmi, Taught History and Security Studies at APCSS (Asia-Pacific Center for Security Studies, Hawaii), UBC (University of British Columbia), NUS (National University of Singapore), and Austin Peay State University Tennessee.)

“Rich in style and documentation, the book captures, as the author's other publications also do, the Hasina regime's draconian and dictatorial repression in Bangladesh. The regime uses the camouflage of corruption-laden development to hoodwink the people and let its thuggish cronies to loot and plunder. It does all its misdeeds, including election rigging, with direct Indian support and the support of its corrupt police and other paramilitary forces. It is the bitter and brutish political reality that the author attempts to describe with a critically informed catalogue of most autocratic assaults on the political opposition and human rights routinely committed by the fascist regime.” (Dr Abdullahil Ahsan, Formerly, Professor of History and International Relations, IIU Malaysia and Sehir University Istanbul, Turkey)

“For the last few years, the author has been doing, in a series of volumes, a much-needed analysis of the political havoc done by the corrupt and disastrous Hasina in Bangladesh. By boldly exposing her cruel, fascist character who has despotically killed democracy and all democratic norms and means – elections, institutions, agencies, and commissions – and who has been wielding unbridled tyranny to loot and let loot, destroy her opponents, and widely violate human rights, with the armed collaboration of her police and at the direction, instruction and instigation from her bloody backer – tribal and caste-ridden India of Hindu fundamentalism and communalism --, the author makes a significant contribution to a study of Bangladesh politics. He means what the majority also says and thinks, that Bangladesh is indeed in base and bovine bondage. Literally a police and prison state, it has seen all its freedoms evaporate, fall apart, and slip away, out of control, irretrievably, into an abysmal pit. The country and its still flickering freedoms need to be rescued from the fascist grip and grab by Hasina. Highly recommended to readers and researchers alike, this book, along with the rest of the set by the author, is not only a tell-all but also a tell-well narrative about the awfully authoritarian and cancerously corrupt regime.” (Dr Abid Bahar, Ethics and Leadership, Dawson College Montreal, Canada)
Show all