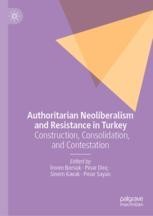 Authoritarian Neoliberalism and Resistance in Turkey

Chapters 2 and 10 are available open access under a Creative Commons Attribution 4.0 International License via link.springer.com.

Dr Pınar Dinç is a political scientist (PhD, London School of Economics, 2017). She was formerly a Marie Skłodowska-Curie Fellow at Lund University, where she continues to work as a researcher.

Dr Pınar Sayan is an Assistant Professor at the Department of Political Science and International Relations at Beykoz University and Fellow at İstanbul Political Research Center.

“These well-researched articles draw a striking and timely picture, at the ground level, of a regime that has become a conduit for plunder and dispossession. The authors describe an arena where authoritarian repression of criticism and opposition has grown, but resistance has also been mounting. As media activism and social movements addressing corruption and environmental carnage proliferate there is, at long last, some hope that an already frayed cloak of legitimacy may give out. The unique focus on resistance of this excellent collection injects a much-needed note of optimism into the literature.” (Çağlar Keyder, Professor of Sociology, State University of New York, Binghamton)