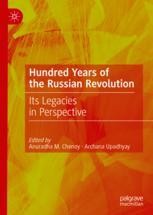 Hundred Years of the Russian Revolution

Its Legacies in Perspective

The book reflects upon the Russian Revolution of 1917 and the ensuing developments in Russia, the rest of the former Soviet Union, Central and Eastern Europe and elsewhere in the world. It discusses the impact of the legacies of the Russian Revolution on political systems, ideologies, economic and social structures and culture.

The book answers some pertinent questions: To what extent are these legacies relevant today for the contextualisation of memory politics, social institutions, and international relations? How does an analysis of 1917 and its legacies contribute to the comparative study of revolutions and social change?

Archana Upadhyay is a Professor in the Centre for Russian & Central Asian Studies, School of International Studies, Jawaharlal Nehru University, New Delhi, India. She has been the recipient of the Commonwealth Fellowship with affiliation to International Policy Institute, King’s College, London, UK. Her research interests include international relations with special focus on South Asian, Russian and Eurasian Issues. Her previous publications are India’s Fragile Borderlands: Dynamics of Terrorism in North-East India (2009); Multiparty System in the Russian Federation: Problems & Prospects (2000); and a monograph Human Rights (co-authored).  Her recent publications are on religion and politics in post-Soviet societies.

“This is a magnificently comprehensive volume on a topic of vital historical importance. The editors have assembled a fine group of scholars, offering diverse perspectives on the legacies of the Russian Revolution of 1917 and its far reaching impact on the political, economic and social structures around the world The diverse chapters are accessible to general readers and also provide unique insights to experts.” (Devendra  Kaushik, Noted scholar on Eurasian affairs, Senior Professor (Retd.), Jawaharlal Nehru University, India)

“This volume, exploring the Great October Socialist Revolution, in commemoration of its centenary jubilee occasion, is significant and timely. Dealing with the crucial event of twentieth century Russian history, it has been initiated and edited by Indian scholars, with contributions by an international team of researches. The fact that more than a century later, the event and its impact is being revised and reconsidered from varying perspectives, amply demonstrates the relevance and global significance of this historical event. The editors of the volume, deserve credit for bringing together varying perspectives that facilitate a wider and clearer understanding of those “ten days that shook the world” and continue to influence the course of history and politics even a century later.” (Tatiana Shaumyan, Head, Centre for Indian Studies, Institute of Oriental Studies, Russian Academy of Sciences, Moscow, Russia)

“Every epoch has its own specific interpretation of historical events. A vast historiography on comparative studies in history exists in Russian and Indian scholarly traditions. Tectonic historical events such as the Russian Revolution of 1917 and its implications have been viewed through varying prisms in both countries for over a century. The most distinguishing feature of this volume on the Russian Revolution is its search for diverse methods of historical interpretation, overcoming stereotypes of the previous decades and the re-evaluation of the events of 1917 in the light of the contemporary world situation. The volume makes a very relevant contribution to the exiting body of literature on the legacies of the Russian Revolution.” (Alexandra Safronova, Chairperson, Institute of Asian and African Studies, Moscow State University, Russia)