Margaretha A. van Es, author of Stereotypes and Self-Representations of Women with a Muslim Background: The Stigma of Being Oppressed, reflects on the right to self-representation as a feminist issue.

Women who want to fight for their emancipation in Western society today face a particular challenge, namely the fact that being ‘oppressed’ has increasingly become a stigma. Contemporary neoliberal discourse celebrates individual freedom and responsibility to such an extent that when women come forward to address gender inequality, they risk being seen as an unwanted deviation from the ideal-typical modern woman who is always free, independent and successful on the labour market.

For women with a Muslim background, the problem is even bigger. During the last few decades, there has been growing public debate in Western societies about the integration and emancipation of Muslim women, in which a modern and emancipated ‘us’ keeps being contrasted with stereotypical images of a backward and patriarchal Muslim ‘them’. Western women are supposedly free and independent, active in the public sphere, sexually liberated and seldom subjected to any form of gendered violence. Muslim women are perceived to be submissive, sexually repressed, isolated, not active in the public sphere, and subjected to all sorts of violence and oppression ‘within their own communities’. A discourse of ‘saving Muslim women from Muslim men’ is frequently used to legitimize policies for migration control and assimilation. In other words, issues of gender equality have become strongly intertwined with those of national belonging. Hence, the ‘oppressed Muslim woman’ stereotype does not only deprive women with a Muslim background from their individuality, but also positions them as outsiders to the society they live in. At times, the stereotype also threatens their right to self-determination, for example when headscarves are banned as ‘symbols of women’s oppression’, or when marriage migration is severely restricted to ‘protect women against forced marriages’.

Although numerous scholars have problematized these issues, little attention has yet been paid to the responses of women with a Muslim background. This discrepancy in scholarly attention is remarkable, especially since scholars and activists have for a long time criticized the lack of voice given to these women. It is time to shift focus from the ways in which ‘Muslim’ women have been stereotyped, to the contributions made to public discourse by these women themselves.

In Stereotypes and Self-Representations of Women with a Muslim Background I show that women with a Muslim background have not simply been passive victims of stigmatizing public debates. Based on archival material and oral history, it presents the histories of a wide variety of minority organizations in the Netherlands and Norway. The book shows how women with a Muslim background have organized themselves since 1975, and how they have struggled to improve their position in Dutch or Norwegian society. Most importantly, it describes how these women have represented themselves in interaction with popular perceptions of ‘Muslim women’ over the course of several decades. Women have internalized and appropriated the ‘oppressed Muslim woman’ stereotype, and developed counter-stereotypes of majority Dutch or Norwegian women. Above all, it reveals how women have tried time and again to break stereotypes by providing alternative images of themselves.

In the 1970s and 1980s, women with a Muslim background organized themselves mainly in secular associations by and for migrant women. They presented themselves as being oppressed and exploited by their employers, by the state and in their families. In showing that they actively and bravely fought against their oppression, they challenged stereotypical representations of migrant women as ‘weak’ and ‘passive’ victims, and sought inclusion in the broader women’s movement.

From the 1990s onwards, women with a Muslim background increasingly began to organize themselves in Islamic organizations: gender-mixed as well as women-only. When public debate about the emancipation of Muslim women swelled, these women found it more and more important to show that not all Muslim women were oppressed – and that whenever they were, this was not because of Islam. In presenting Islam as fully compatible with Western notions of gender equal opportunities, they not only sought to legitimize their quest for freedom and autonomy, but they also sought acceptance for themselves and their religion in Dutch or Norwegian society.

Margaretha A. van Es works as a Postdoctoral Researcher at the Department of Philosophy and Religious Studies at Utrecht University, the Netherlands. She holds a PhD in History from the University of Oslo, Norway. Her expertise lies at the intersection of gender, religion, media and cultural diversity. 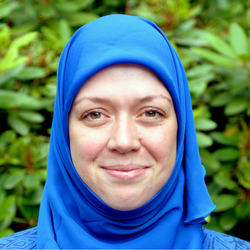 Books by Margaretha A van Es