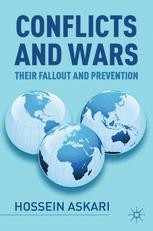 Their Fallout and Prevention

Explaining how the price of aggression is low enough that governments do not avoid conflicts, this book uses examples drawn from recent conflicts in the Persian Gulf to examine many dimensions of costs incurred by warfare and proposes a private sector solution to warfare's low cost.

'The message of Conflicts and Wars is clear: conflicts and wars are more costly than we imagine. We need a new approach to prevent conflicts. Askari provides us with a new and imaginative roadmap. This book is essential reading for everyone who labors in the pursuit of peace. That especially includes policymakers and politicians who espouse peace while supplying and supporting aggressors around the globe.'

From the foreword by George A. Akerlof, Nobel Laureate in Economics, 2001, and Koshland Professor of Economics, University of California at Berkeley

"An idea whose time has come. From the beginnings of civilization humankind has prayed for peace while plotting war. Hossein Askari compels us to look at the cost of war and challenges us to act for peace. A thought-provoking and essential read in this day and age."

Mac Maharaj, former ANC lead negotiator in talks with the National Party Government, former joint secretary of the Transitional Executive Council, and first minister of transportation in the Mandela government

'This is one of those rare books that comes along occasionally to provide an original perspective on a timeless problem. Written in an engaging, lively and accessible style, Conflicts and Wars provides a masterful insight to the factors underlying wars and seemingly endless conflict around the world. Wars have always been condemned on moral grounds. However, Askari combines sound history with economic analysis to document the fact that wars, even before the current age of austerity, have become simply too expensive to pursue. His novel solution to ending conflict will no doubt spark a serious discussion that will hopefully aid in significantly reducing conflict in our time.'

'In Conflicts and Wars, Hossein Askari provides in understandable layman's terms a meticulous review of the literature on the costs of warfare. Offering his own blended methodology, Askari exposes the ghastly costs of human carnage, which are universally underestimated. He also provides insightful institutional recommendations to impose the costs of war directly upon aggressive leaders and nations as well as on private weapons producers. This masterful work is a must-read for national security scholars and for everyone interested in the future of mankind.'

'A thought-provoking and unique analysis of the impact of aggression on the powerless. Hossein Askari's real genius, however, is his solution-based action plan asking for active global citizenship to help the political and diplomatic establishment to become more effective in preventing conflicts and improving the lives of all world citizens. I have known Hossein Askari for over 40 years, first as his student at Tufts and then as my mentor and friend and I have always witnessed his keen intellect coupled with a strong sense of ethics.'