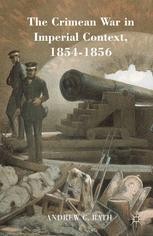 The Crimean War was fought far from its namesake peninsula in Ukraine. Until now, accounts of Britain's and France's naval campaigns against Czarist Russia in the Baltic, White Sea, and Pacific have remained fragmented, minimized, or thinly-referenced. This book considers each campaign from an imperial perspective extending from South America to Finland. Ultimately, this regionally-focused approach reveals that even the smallest Anglo-French naval campaigns in the remote White Sea had significant consequences in fields ranging from medical advances to international maritime law. Considering the perspectives of neutral powers including China, Japan, and Sweden-Norway, allows Rath to examine the Crimean conflict's impact on major historical events ranging from the 'opening' of Tokugawa Japan to Russia's annexation of large swaths of Chinese territory. Complete with customized maps and an extensive reference section, this will become essential reading for a varied audience.

Andrew Rath received his Ph.D. in History from McGill University, Canada. He and his wife Sarah live in Bethesda, Maryland.

“This work is well researched and written with a much appreciated completeness. ... It makes an excellent contribution to understanding maritime history during the Crimean conflict but might be better appreciated by those readers interested in maritime warfare, maritime law, and maritime history in the mid nineteenth century rather than a general audience. It should definitely be part of the library of any historian or researcher intent on conducting future research in this area.” (Wayne Abrahamson, The Northern Mariner, cnrs-scrn.org, Vol. 27 (3), July, 2017)

“This is the most important and original contribution to scholarship on the Crimean War for many years, it rescues the war from the vice like grip of British soldiers and Florence Nightingale, restoring it to its rightful place as a major event in world history. The quality of research and analysis amply sustain an ambitious argument. It should reshape the debate about this controversial conflict, and add significantly to our understanding of mid-nineteenth century international relations.” (Andrew Lambert, International Journal of Maritime History, Vol. 28, August, 2016)

“Rath’s detailed examination of its lesser-known naval campaigns sheds light on the complexity of the Crimean War, as well as the war aims of all belligerent parties. … Rath admirably achieves his main goal: showing the larger global impact of the war’s more distant theaters. … The Crimean War in Imperial Context, 1854–1856 is a must-read for anyone interested in military history, the Crimean War, and the politics of European imperial expansion.” (Mara Kozelsky, The Journal of Military History, Vol. 80 (3), July, 2016)

“Rath’s book weaves the imperial context of the Crimean War into a narrative that highlights its long-term global impact and its transformative effects on empire, especially on two empires that were not official belligerents: China and Japan. The book does not, however, simply focus on the extra-European dimensions of the war as it dedicates a great deal of space to the conflict within Europe. … it is Rath’s focus on the greater imperial picture that will particularly attract readers.” (Mahon Murphy, LSE Review of Books, blogs.lse.ac.uk, May, 2016)

“This book will be an essential starting point for anyone interested in studying the more detailed aspects of any of the campaigns mentioned and especially with regard to the comprehensive extent of its references. … The book is solidly and attractively bound and will withstand much usage. The text is informative and well written … . This book is a major step in reducing the view, alas still common, that the Crimean War was simply that, a war in Crimea.” (Ian R. Stone, Polar Record, April, 2016)

“Rath’s achievement enables Anglophones to see over the hill and follow the war from a Russian perspective as well as the more familiar British and French ones. … Rath’s work is also important in describing the campaigns in the Baltic, Arctic, and Pacific. … Rath’s contribution to accounts of the Crimean War is valuable, and worth the effort.” (Nicholas Tracy, The Mariner’s Mirror, Vol. 102 (3), 2016)

“This ambitious and clever study illuminates the often-forgotten global aspects of the Crimean War.  Andrew Rath brings together a tremendous amount of primary source material in eight languages to re-frame this struggle within the story of European empire and modernization in the mid-19th century.  This is fine argument for the continued dynamism of military and diplomatic history and may convince readers to re-think their understanding of this important 19th century conflict.” (Society for Military History (SMH))

Book Title
The Crimean War in Imperial Context, 1854-1856
Authors
Copyright
2015
Publisher
Palgrave Macmillan US
Copyright Holder
The Editor(s) (if applicable) and The Author(s)