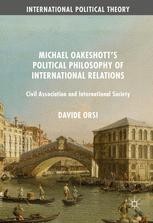 Davide Orsi holds a PhD in Politics and International Relations from Cardiff University, UK. Previously, he studied at Fondazione Collegio San Carlo in Modena and at the University of Bologna. His research interests cover international political theory, legal theory, international relations theory and the history of political thought. He has published work in journals including the Journal of International Political Theory, Collingwood and British Idealism Studies, the European Legacy, and the British Journal for the History of Philosophy.

“His work will prove invaluable to teachers and students alike, providing as it does a fresh and invigorating source of scholarly argument, of real value to theorists and practitioners alike.” (J. E. Spence, International Affairs, Vol. 95 (1), January, 2019)
“This well-written, widely researched, and mostly well-argued book traces the international implications of the political philosophy of the 20th century English thinker Michael Oakeshott, in particular his distinction between two ideal types of association—civil or moral versus instrumental, or ‘enterprise.’ … Summing Up: Recommended. Upper-division undergraduates through faculty.” (W. J. Coats, Choice, Vol. 54 (9), May, 2017)

“Orsi’s book offers a rich and articulated vision of Oakeshott’s political philosophy and its philosophical fundaments – starting from idealism to Hobbes and Montaigne – combined with the recent debate on the nature and handling of international relations. The book’s mix of concrete arguments and theoretical groundwork enables readers to fully grasp the originality of Oakenshott’s thought along with its present-day value.” (Paola Mastrantonio, Bollettino della Società Filosofica Italiana,(221), May-August 2017)

“Dr Orsi has added a new and important dimension to international political theory by engaging in a systematic analysis of the implications of Michael Oakeshott’s thought for our understanding of international relations, and the alternative theories that currently hold centre stage, such as constructivism.” (Professor David Boucher, Cardiff University, UK)