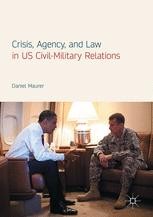 Crisis, Agency, and Law in US Civil-Military Relations

This book develops a responsible and practical method for evaluating the success, failure, or “crisis” of American civil-military relations among its political and uniformed elite. The author’s premise is that currently there is no objectively fair way for the public at large or the strategic-level elites to assess whether the critical and often obscured relationships between Generals, Admirals, and Statesmen function as they ought to under the US constitutional system. By treating these relationships—in form and practice—as part of a wider principal (civilian)-agency (military) dynamic, the book tracks the “duties”—care, competence, diligence, confidentiality, scope of responsibility—and perceived shortcomings in the interactions between US civilian political authorities and their military advisors in both peacetime and in war.

Major Dan Maurer is a combat veteran, former engineer officer, and has practiced military law as a prosecutor in courts-martial, as an appellate counsel, and in leadership positions within the Army Judge Advocate General’s Corps. He is a contributing author at the United States Military Academy's Modern War Institute.

“Dan Maurer has broken new ground in this well-researched and well-written book. Maurer provides a framework for understanding and diagnosing the health of civil-military relations in our democracy.  This is an important book because today's threats to national security demand strategic competence, and strategic competence requires healthy civil-military relations. Maurer's book is of particular value to civilian and military officials charged with protecting the nation.” (H.R. McMaster, Lieutenant General, US Army, and author of “Dereliction of Duty: Lyndon Johnson, Robert McNamara, the Joint Chiefs of Staff, and the Lies that Led to Vietnam”)

“This is an important and unique book. Dan Maurer brings a lawyer's logic and a soldier's experience to the important and contentious question of the proper relationship between senior civilian and military leaders in crafting grand strategy for the United States. It is a tour de force and, quite simply, a must read.” (David Johnson, Colonel (retired), PhD, Senior Fellow, Center for Strategic and Budgetary Assessments (CSBA), author of “Fast Tanks and Heavy Bombers: Innovation in the U.S. Army, 1917-1945” and “Modern U.S. Civil-Military Relations: Wielding the Terrible Swift Sword”)

“How can the vitality of America's civil-military relations be objectively analyzed?  In the disciplines that study these relations, there has never been a consensus.   With his legal background, Dan Maurer complements moral and political arguments as he weaves the fiduciary duties of candor, loyalty, confidentiality, and scope of responsibility into a jurisprudential form of agency theory as a basis for such norms.  His cases and analysis are impressive, and the field of modern civil-military relations is now analytically the richer for it.” (Don M. Snider, Colonel (retired), PhD, Professor Emeritus, West Point, and retired Professor of Profession and Ethic, US Army War College)