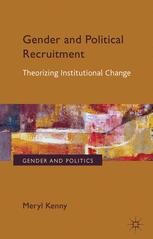 Meryl Kenny is Vice-Chancellor's Postdoctoral Research Fellow at The University of New South Wales, Sydney, Australia. Her research on feminist institutionalism and women and politics has appeared in journals such as Publius: The Journal of Federalism, Politics & Gender, International Political Science Review, Politics, and several edited volumes.

'Rethinking the conventional supply-and-demand model of political recruitment, Gender and Political Recruitment represents a seminal contribution to the emerging literature on feminist institutionalism. Combining macro- and micro-level data on candidate selection dynamics in Scotland, Kenny provides a nuanced and critical appraisal of the prospects for reforming institutions in the face of powerful gendered legacies. The book thus offers important new insights to institutionalist scholars, feminist research, and most importantly those interested in forging new syntheses across these approaches.'

'Meryl Kenny's book demonstrates the extent to and ways in which processes of political recruitment are gendered. She provides both evidence and argument of such gendering to be a continuing process that interacts with the formal and informal political institutions through which processes of political recruitment operate. Her analysis demonstrates the crucial importance of feminist institutionalist approaches to the understanding of how political representation is gendered.'

'In this brilliant debut, Meryl Kenny combines conceptual innovation, forensic analysis, and compelling story-telling to capture the gendered dynamics of the institutions of political recruitment. Gender and Political Recruitment demonstrates the considerable promise of a feminist institutionalist approach for not only gender and politics scholars but also for 'mainstream' political science. It should be required reading for anyone engaged with, or intrigued by, the gendered puzzles of political recruitment and the wider dynamics of inequality in political life.'