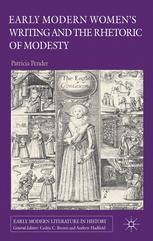 Early Modern Women's Writing and the Rhetoric of Modesty

An in-depth study of early modern women's modesty rhetoric from the English Reformation to the Restoration. This book provides new readings of modesty's gendered deployment in the works of Anne Askew, Katharine Parr, Mary Sidney, Aemilia Lanyer and Anne Bradstreet.

PATRICIA PENDER is a postdoctoral Research Fellow in the School of Humanities and Social Sciences at the University of Newcastle, Australia. She has published widely on feminism and the early modern period in essay collections and international journals including SEL: Studies in English Literature, 1500-1900, Women Writers: Elizabethan to Victorian and Huntingdon Library Quarterly.

"Patricia Pender's engaging and thoroughly researched book argues that early modern women writers' uses of modesty tropes need to be taken as just that that is, as the use of conventional tropes available to male and female writers alike . . . An especially interesting aspect of Pender's book emerges in her work on Mary Sidney, where she argues that while Sidney presents herself as properly, femininely submissive, her writing nevertheless articulates a strongly competitive and ambitious self at odds with the ostensible humility of her dedicatory poems . . . This book provides ample evidence that it is precisely in their seeming admissions of incompetence that we find the most powerful assertions of early modern women's rhetorical skill and confidence." Parergon

"In this tightly focused study, Patricia Pender homes in on a central feature of early modern women's writing and of modern critical responses to it the expression of authorial modesty. As Pender astutely notes, female authors' expressions of self-effacement, self-deprecation, or insufficiency are among the most frequently anthologized parts of their works, and in the modern period they have often been read as clear evidence that the authors had uncritically internalized oppressive, patriarchal attitudes toward authorship. Although academic specialists no longer take individual author's self-deprecation at face value, the field of Renaissance literature as a whole continues to view modest self-effacement as the cornerstone of female authorship. Pender rightly points out that scholars do not read male authors' self-effacement in such a literal way, and she challenges us to read women's expressions of modesty with greater scrutiny and rhetorical care The great strength of this book lies in its combination of detailed, nuanced readings of individual passages and its birds-eye view of the way the uncritical understanding of women's modesty tropes has inflected the field as a whole. This book will certainly inspire scholars to return to the many other professions of modesty found in women's writing and to assess them anew The chapters on Sidney and Lanyer are particularly powerful the six chapters of this book have much to offer readers, and Pender succeeds in making the case that female professions of modesty are highly crafted rhetorical performances that require careful and nuanced analysis." Micheline White, Sixteenth Century Journal

"This is a provocative book, which will be of interest to a great many readers because of its alertness to current theoretical issues, its awareness of historical and cultural contexts, its interest in the material book, and its close reading of particular texts. Its focus on gendered discourse makes a significant contribution to feminist criticism. At the same time, it can be read as a series of case studies chosen to reflect major issues that early modern women writers faced and set out to solve by subtle and diverse uses of the rhetoric of modesty." Elizabeth McCutcheon, Early Modern Studies Journal