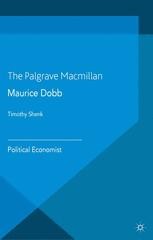 This book explores the life of the man whom even his critics acknowledged was one of the world's most significant Communist economists. From his outpost at the University of Cambridge, where he was a protégé of John Maynard Keynes and mentor to students, Dobb made himself into one of British communism's premier intellectuals.

Timothy Shenk is a graduate student in history at Columbia University. This is his first book.

“Shenk has done a remarkable job. In a relatively short monograph, he has managed to elucidate and evaluate Dobb’s writings and, at the same time, open a window on the world in which he lived and worked. While required reading for those interested in the development of Marxist economic thought in the twentieth century, it should also appeal, because of its unique perspective, to anyone curious about radical politics and economics in Great Britain during Dobb’s lifetime.” (Jon Cohen, History of Political Economy, 2015)

"A brilliant and richly illuminating depiction of Dobb's life and ideas, written in the best tradition of scholarship on the history of economic thought. In providing a wealth of new information about Dobb, Shenk arrives at striking new insights about the transformation of both Marxist scholarship and the economics profession during his lifetime." - Angus Burgin, Johns Hopkins University, USA

"A magnificent account of the life and thought of Maurice Dobb. Yet, this book moves far beyond conventional biography to explore, in such an enjoyable and engaging way, the entire history of economic thought. Through Dobb's novels, plays, letters, lectures, published works, and unpublished ruminations, Shenk invites the reader through the small window of Maurice Dobb's fascinating life, which has a spectacular view onto the history of the twentieth century." - Johanna Bockman , George Mason University, USA

"Timothy Shenk has written a lively and absorbing account of a central figure in the extraordinarily talented group of mid-twentieth century Cambridge Marxists. He is to be thanked for furnishing us with such a fresh and lucid study of a seminal life." - Robin Blackburn, University of Essex, UK

"This outstanding biography of Maurice Dobb is absorbing and instructive. The author has captured uncannily Maurice's personality and his remarkably full and traumatic political life. Timothy Shenk is to be congratulated on writing such a fine work of scholarship, which I feel sure Maurice, though he would have been embarrassed, would nevertheless have approved of." - Geoffrey Harcourt, University of Cambridge, UK

"an extraordinary accomplishment . . . Maurice Dobb: Political Economist is among the most important books on the history of capitalism published this year, and it should be assigned to every seminar dedicated to the exploration of that growing sub-field. Like the best non-academic writers on the history of economic thought (the New Yorker's John Cassidy comes to mind), Shenk possesses the rare gift of effortlessly translating difficult theorizations of the market into clear English." - Kurt Newman