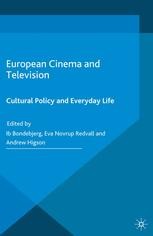 This book offers comparative studies of the production, content, distribution and reception of film and television drama in Europe. The collection brings together scholars from the humanities and social sciences to focus on how new developments are shaped by national and European policies and practices, and on the role of film and television in our everyday lives. The chapters explore key trends in transnational European film and television fiction, addressing issues of co-production and collaboration, and of how cultural products circulate across national borders. The chapters investigate how watching film and television from neighbouring countries can be regarded as a special kind of cultural encounter with the possibility of facilitating reflections on national differences within Europe and negotiations of what characterizes a national or a European identity respectively.

Ib Bondebjerg is Professor of Film, Media and Communication at the University of Copenhagen, Denmark. He was chairman of the Danish Film Institute (1997–2000) and of the Center for Modern European Studies (2008–2011). He has published numerous books and articles on European film and media culture and is on the editorial or advisory board of several international journals.
Eva Novrup Redvall is Associate Professor in Film, Media and Communication at the University of Copenhagen, Denmark, where she is also head of the Research Priority Area on Creative Media Industries. She has published widely on film and television production, most recently with her book Writing and Producing Television Drama in Denmark: From The Kingdom to The Killing (2013).
Andrew Higson is Greg Dyke Professor of Film and Television, and head of the Department of Theatre, Film and Television, at the University of York, UK. He is a specialist in English and British cinema. His books include: Film England (2011), English Heritage, English Cinema (2003) and Waving the Flag: Constructing a National Cinema in Britain (1995).

“The essays are all well written, cover a wide range of examples and identify pathways for innovative methodologies and integrative forms of analysis. It is a work of great scholarship and collective endeavor that will be of real value to anyone interested in European cinemas, television, policy, society and culture, and perhaps above all for those, like the book’s editors and authors, interested in the connections across all these domains.” (Jonathan Hardy, Transnational Cinemas, March, 2016)

“It provides data, detailed descriptions of practices and regulative policies as well as some of their consequences in the complex, fragmented, transnational, occasionally successful, but ultimately somewhat disordered, film and television landscape of Europe. … European Cinema and Television: Cultural Policy and Everyday Life represents an authoritative and significant contribution to the increasingly studied field that is the industries and regulative frameworks of European film and television.” (Olof Hedling, Nordicom Review, Vol. 37 (1), 2016)