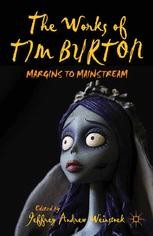 The Works of Tim Burton

Tim Burton has had a massive impact on twentieth and twenty-first century culture through his films, art, and writings. This book examines how his aesthetics, influences, and themes reflect the shifting social expectations in American culture by tracing his Burton's move from a peripheral figure in the 1980s to the center of Hollywood filmmaking.

“This volume represents a solid collection of essays that help the reader understand the complexities of Tim Burton and his work. … This book makes an important contribution to the growing body of Burton studies and is a welcome addition to the libraries of Burton scholars as well as fans who want to probe the work of this artist in greater depth.” (John W. Morehead, The Journal of the Fantastic in the Arts, Vol. 27 (2), 2017)

"The volume covers Burton's work from 1984 to 2012, fully fleshing out both Burton the auteur and Burton the cultural phenomenon . . . The sheer number of approaches taken here assures that the book will engage fans, scholars, and cinephiles. Summing Up: Highly recommended. Lower- and upper-division undergraduates; researchers and faculty; general readers." - CHOICE

"Weinstock, who knows his unconventional filmmakers well, provides a carefully modulated trove of essays that effectively cover the Burton oeuvre, even as they demonstrate the perhaps surprising variety of his work. Each essay is a gem, with the whole adding up to a serious, provocative exploration of the films." - R. Barton Palmer, Director of Film Studies, Clemson University, USA, and author of Joel and Ethan Coen and Shot on Location: The Postwar American Realist Film

"Tim Burton is a phenomenon of modern film, blending the humorous, the horrific, the macabre, and the magical with extraordinary skill. Jeffrey Andrew Weinstock's wide-ranging collection delves into Burton's career from Frankenweenie (1984) to Frankenweenie (2012), exploring the richness of his themes, the complexity of his allusions, and the nonstop inventiveness of his visual style. A treat for Burton's countless admirers, a welcoming introduction for newcomers." - David Sterritt, Professor of Film, Columbia University, USA, Chair, National Society of Film Critics