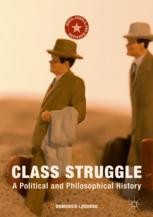 A Political and Philosophical History

Available for the first time in English, this book examines and reinterprets class struggle within Marx and Engels’ thought. As Losurdo argues, class struggle is often misunderstood as exclusively the struggle of the poor against the rich, of the humble against the powerful. It is an interpretation that is dear to populism, one that supposes a binary logic that closes its eyes to complexity and inclines towards the celebration of poverty as a place of moral excellence. This book, however, shows the theory of class struggle is a general theory of social conflict. Each time, the most adverse social conflicts are intertwined in different ways. A historical situation always emerges with specific and unique characteristics that necessitate serious examination, free of schematic and biased analysis. Only if it breaks away from populism can Marxism develop the ability to interpret and change the world.

Domenico Losurdo is Emeritus Professor in the University of Urbino, Italy.  He is an Italian philosopher and political theorist, focusing specifically on Marxist thought. He publishes in a variety of languages, including English, French, Italian, and German. His work been discussed by publications such as Financial Times, Guardian, Frankfurter Allgemeine Zeitung, Die Zeit, Le Monde, Le Monde Diplomatique, Libération, and Corriere della Sera.

“Losurdo has comprehensively demonstrated that we can, and indeed should, question the context of the appearance or reappearance of many of the bourgeoisie’s crypto-philosophical works. His book shows that class discourse, despite the best efforts of the corporate media, is not dead yet! … .” (Thomas Klikauer, Labor History, Vol. 60 (3), 2019)

“Thanks to a documentation that is very large and amazingly informative, Losurdo convincingly shows how his scheme of class struggle is useful to explain modern history up to the present times. Far from being just a history of the concept of class struggle and of the meanings it has assumed over time, Losurdo’s book is a great essay of philosophy of history.” (Gianni Vattimo, Emeritus Professor of Philosophy, University of Turin, Italy)

“In his new book Losurdo demonstrates brilliantly with a great clarity and rigor a very important thesis today: Marx, Engels, Lenin, Gramsci and Mao have developed a non-binary conception of class struggle. The integral concept of class struggle goes beyond the classical opposition between Work and Capital. It includes the secular feminist fight for emancipation from male domination and the modern battles for national liberation.” (André Tosel, Emeritus Professor of Philosophy, University of Nice, France)

“Losurdo shows convincingly that the often maligned concept of class struggle can be used in a productive way when put in a broader context. When class struggle is thus defined as a comprehensive theory of social conflict the term becomes indeed a highly useful instrument in analyzing the various aspects of the present global crisis and their interconnections.” (Jürgen Pelzer, Professor, Occidental College, USA)