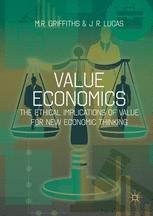 The Ethical Implications of Value for New Economic Thinking

The last financial crisis revealed a gap between business practice and ethics. In Value Economics, Griffiths and Lucas examine some of the reasons for this ethical gap and discuss the resulting loss of confidence in the financial system. One of the reasons has been hazy or inadequate thinking about how we value economic enterprises. With the close link between the creation of value and business ethics in mind, this book proposes that economic value should become the basic metric for evaluating performance in the creation of value, and for establishing fair and reasonable standards for executive compensation. Value Economics considers a number of rational philosophical principles for business management, on which practical codes of business ethics can be based. As the creation of value has moral implications for economic justice, the book reaffirms the argument for economics as a moral science, and seeks, within the context of proposed changes in the regulation and control of financial services, to answer the following question: will things really change after the last financial crisis?

M. R. Griffiths was Managing Partner for Italy at the actuarial consulting firm, Towers Perrin (now Towers Watson), until retiring in 2003, and is now a non-executive director of two Italian insurance companies in Milan, Italy. He was previously President of the British Chamber of Commerce for Italy where he has lived for thirty years.
J. R. Lucas is a Fellow and Former Tutor of Merton College, Oxford, and previously a Fellow of Corpus Christi College, Cambridge. He is a former President of the British Society for the Philosophy of Science, and his publications include Democracy and Participation (1976), On Justice (1980) and Responsibility (1993).

"The Economic Value concept is of interest, but I am not sure how easy it would be to establish a firm relationship with executive compensation. To do so, you would need to sell the idea to some key institutional investors, whose views on pay are very influential. I am thinking of people like Norges, Legal and General and others. The proxy advisors like ISS and Glass Lewis are important too. In delivering senior pay schemes Remuneration Committees are most affected by their views. So far, they have proved reluctant to approve mechanisms which are not robustly related to accounting numbers. " (Howard Davies, Chairman of RBS)

“This book addresses some of the real problems facing the corporate world today.  A world which has seen failures such as Enron, Royal Bank of Scotland, Lehman Brothers and Carillion which at their heart result from a poor understanding of value , the process of value creation and the causes of its destruction. This excellent book provides examples of superb corporate appreciation of value and value creation ranging from Berkshire Hathaway to Apple and is informed by a deep philosophical understanding and concern with human values. The authors develop a framework which is essential reading for all those interested in furthering our economic and political development.” (Dr George Patrick Maher, Fellow of the Institute of Actuaries)

“Michael Griffiths new book on value economics tackles the problem of assessing value by expanding well tested accounting tools to incorporate important elements of social value along with the more traditional notions of profit. These new tools supplement more traditional cost benefit analysis and offer a useful new way to provide information about organizations both private and public, and by doing so provide better incentives to those organizations to create value in the broad and useful sense.” (David Levine, Professor of Economics at European University Institute)

“Economics is in urgent need of being rescued from its captivity to virtual reality – a world in which measurable practical value and demonstrable human benefit seem to have vanished over the horizon and been replaced by a sophisticated board game (with rather high human collateral damage).  We still lack a credible vision, let alone a programme of action, to deal with the moral implications of sluggish growth and shrinking employment; we still fail to see shareholder value in the context of the well-being of stakeholders in the whole economic enterprise.  Here is a timely reminder that this situation can be challenged and changed if we are ready to challenge some of the foundations of classical economics and to understand value or prosperity in terms of the human well-being that is promoted by participatory or co-operative business practice.” (Rowan Williams, Master of Magdalene College, Cambridge, UK)

“There is a widespread feeling that capitalism has lost its moral compass – and that pay scales for senior corporate executives have departed from any sense of fair reward for value created. In seeking to redefine economic value within a moral framework, Griffiths and Lucas shine a spotlight on one of the modern world’s most divisive issues.” (Martin Vander Weyer, Business Editor, The Spectator)

“Value Economics offers fresh thinking on the metrics of capitalism and the moral dimension of economics. In the aftermath of the financial crisis it fills an important gap.” (John Plender, Columnist, Financial Times)

“While defining economic value in accounting terms may be difficult, its concept and relevance is now broadly acknowledged. This book will widen its appeal.” (Sir Win Bischoff, Chairman of the Financial Reporting Council (FRC))

“The forceful concept of economic value deserves to be developed into a practical dashboard that reflects measurement and allows detailed judgement and independent assurance, leaving out discretionary judgment of Boards. ” (Jan Maarten de Jong, Chairman PwC Netherlands and KBL Luxemburg)

“How to relate executive compensation to economic value emerged as a key issue during the last financial crisis. Value Economics makes a useful contribution to defining how we might reward people for the creation of economic value. ” (Andrea Morante, Chairman of Sergio Rossi, SpA, formerly CEO of Pomellato SpA, and investment banker with Credit Suisse)

“The concept of economic value is developing as a useful additional tool for judging value. Its relevance may increase as shareholder value becomes more difficult to apply in times of highly speculative and volatile stock markets. ” (David Hinde, former Chairman of Invesco Asia Trust plc, and head of international finance arm of Samuel Montagu)

“It is now commonly acknowledged that the concept of 'shareholder value' led companies and executive pay badly astray over the past two decades, and that we are badly in need of more sophisticated thinking about both corporate value and economic value more wildly. Griffiths and Lucas perform an important service in doing some of that thinking on behalf of all of us, blending philosophy with sharp financial analysis.” (Bill Emmott, editor-in-chief The Economist 1993-2006)