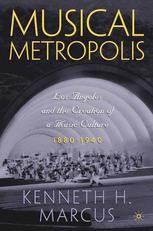 Decentralization and diversity characterized much of the performance of art music in Los Angeles. Decentralization defined the city's growth since the late-nineteenth century, and because the central city did not dominate music culture, as in the East and Midwest, a greater diversification of music emerged in the communities of Greater Los Angeles. Performers and audiencesincluded Latinos, Euro-Americans, Asian Americans, and African Americans, but the notion of diversity goes beyond ethnicity; it also includes 'media diversity', the presentation of music through a variety of media. recording, radio, film media strongly influenced music performance in the city as it grew into the epicenter of entertainment in America.

Kenneth Marcus is Associate Professor of History and
Director of the International Studies Institute, University of La Verne, California.

"As Tennyson said of Camelot, Los Angeles was a city built to music. Choirs, touring opera companies, a symphony orchestra, musical pageants, the Hollywood Bowl, film scores of surprising power, and radio provided building blocks of identity for the City of Angels equal to aqueduct, automobile, or freeway. Comprehensively, Kenneth H. Marcus has assembled the story and scores of the music that helped build a city." - Kevin Starr, University Professor of History, University of Southern California and State Librarian Emeritus

"Musical Metropolis is a skillfully researched account which addresses the relatively unexamined subject of music in the cultural life of Los Angeles between 1880 and 1940. It examines the unique aspects of the city's regional culture distinguished by geographic and ethnic differences. This richly detailed study also highlights the local development of film, radio, and recorded music, noting its consequent impact on worldwide audiences. Readers will benefit from the fact that examples of the broad range of musical genres discussed are represented on the accompanying CD." - Gloria Ricci Lothrop, Professor of History Emerita, California State University, Northridge

"Musical Metropolis is a terrific book: both a history of musical expression in Los Angeles and an insightful cultural history of the city." - William Deverell, Director, Huntington-USC Institute on California and the West