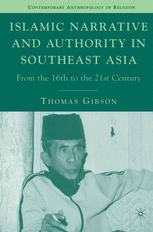 This is a literary and anthropological analysis of historical narratives that illuminate regional notions of cosmological kingship, cosmopolitan notions of Islamic law and mysticism, and global notions of the modern bureaucratic state. These notions have coexisted in Southeast Asia since the Sixteenth century and influence politics to this day.

THOMAS GIBSON is Professor and Chair of Anthropology at the University of Rochester, USA.

"A complex and ambitious study, Tom Gibson has followed up on his previous foray into the interweaving memories and traditions of Sulawesi to explore the ways in which Islam has been interpreted, appropriated, and deployed in a particular Southeast Asian context...The result of long years of labour, this is indeed a major achievement and students of Islam and Asian history should certainly look forward to the final volume of the planned trilogy." - Journal of the Economic and Social History of the Orient, Michael Laffan, Princeton University "Against this backdrop, Thomas Gibson's new book, Islamic Narrative and Authority in Southeast Asia stands as a major contribution to our understanding of Islam in Southeast Asia...Gibson's erudite readings and expert renderings of oral histories, Islamic scriptures, epic narratives, aristocratic geneaologies, and state documents represent the very best kind of scholarship as practiced by an anthropologist-cum-historian." - John T. Sidel, London School of Economics"Gibson's book is an ambitious and successful attempt to formulate structural models for the interpretation of Islamic history in Southeast Asia over five centuries. It is a major achievement that will be taken up by students of Islam and of Asian history." - Peter van der Veer, University Professor, University College, Utrecht University

"This innovative and important work critically examines the interaction of overlapping spheres of symbolic knowledge in the historical development of a major Muslim community in Indonesia. Through meticulously tracing the permutations of indigenous Austronesian conceptions of authority, Islamic understandings of learning and charisma, and bureaucratic models of knowledge and power, Gibson demonstrates the continuing relevance of each of these dimensions in contemporary Makassarese Muslim responses to both Indonesian national 'reformation' (Reformasi) and Islamic religious revival in the era of globalization. Drawing expertly on sources in both Makassarese and modern Indonesian as well as Dutch colonial archives, Gibson draws detailed pictures of a series of shifts in the equilibrium between these modes of religious and political authority over the past four centuries. It is an ambitious book." - R. Michael Feener, Associate Professor of History, Asia Research Institute, National University of Singapore

"This is a work of impressive scope, reaching far across time and space, yet remaining carefully grounded in the ethnography of South Sulawesi. At a time when overgeneralizations about Islam abound, it is extremely useful to have a perspective from a place that, while seemingly marginal to the heartlands of the Muslim world, is also the product of a thoroughly cosmopolitan history." - Webb Keane, Professor of Anthropology, University of Michigan; Author of Signs of Recognition: Powers and Hazards of Representation in an Indonesian Society and Christian Moderns: Freedom and Fetish in the Mission Encounter