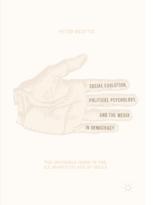 Social Evolution, Political Psychology, and the Media in Democracy

The Invisible Hand in the U.S. Marketplace of Ideas

This book analyzes why we believe what we believe about politics, and how the answer affects the way democracy functions. It does so by applying social evolution theory to the relationship between the news media and politics, using the United States as its primary example. This includes a critical review and integration of the insights of a broad array of research, from evolutionary theory and political psychology to the political economy of media. The result is an empirically driven political theory on the media’s role in democracy: what role it currently plays, what role it should play, and how it can be reshaped to be more appropriate for its structural role in democracy.

Peter Beattie is Assistant Professor and Assistant Programme Director of the MSSc in Global Political Economy at The Chinese University of Hong Kong, China, where he teaches political economy and political psychology. His published work has focused on the role of ideas in politics, and his research has been presented at conferences in Asia, Europe, South America, and the United States.

“One cannot help but be impressed with the extensiveness of Beattie’s knowledge and command of the diverse information he has assembled and uses in addressing the dual questions of why democracy, at least in the context of political process in the United States, is ‘broken’ and what avenues are open for its ultimate repair. The consistently careful manner in which he documents his claims is equally impressive. He asks much of the reader but gives much in return.” (Dennis S. Gouran, International Journal of Communication, Vol. 14, 2020)
“This is a really interesting book, which can provide the basis for a novel approach to understanding of media effects, and a series of testable hypotheses which can be the basis for further empirical work.” (Sharon Coen, The International Journal of Press/Politics, February 1, 2020)
“The book ‘explains how ‘an invisible hand’ creates a de facto propaganda system within the American marketplace of ideas’ … . Peter Beattie’s thought-provoking book has a lot to offer to students and scholars interested in the link between media and democracy.” (European Journal of Communication, Vol. 34 (2), 2019)

“If I were to tell you that someone has written a book that melds together ideas about information dissemination consumption, evolutionary psychology, and a normative critique of the American media, you might not believe it was possible. But you’d be wrong. Social Evolution, Political Psychology, and the Media in Democracy explains how humans think, what they believe, what they hear, and why it is often bad for American democracy. But he also offers us a way forward through a comparison with other countries. In today’s politically deteriorating environment, we need a book like this.” (Brian Rathbun, Professor of International Relations at University of Southern California, and author of Reasoning of State: Realists, Romantics and Rationality in International Relations)

“In this quirky, clever, and creative work, Peter Beattie leads us on a wild romp through evolutionary biology, social psychology, history, politics, literature, and philosophy to understand why democracy is failing and the human race is flirting with extinction—and what, if anything, can be done about it. No questions could be more important for us to ponder at this time.” (John T. Jost, Professor of Psychology and Politics, and Co-Director of the Center for Social and Political Behavior at New York University)

“We are what we got fed by the news media, to a great extent. Armed with a social evolutionary approach toward artificial selection in the marketplace of ideas, Peter Beattie has ably shown that psychology tends to prime us into accepting and rejecting certain ideas and how the news media tends to supply those ideas that fit into our biases. A penetrating critique of the news media today and a passionate defense of a new marketplace of ideas for democracy.” (Shiping Tang, Distinguished Professor of International Relations and Public Affairs at Fudan University, and author of The Social Evolution of International Politics)

“Corrupted by corporate interests and vulnerable to easy manipulation, our news media system is failing us.  Beattie makes an urgent and compelling case for bringing it under democratic control - for the sake of preserving democracy itself.  This book couldn't be more timely.  In an era of dangerous political instability and ecological breakdown, we need media that delivers critical, fact-based communication now more than ever before.” (Jason Hickel, Lecturer of Anthropology at Goldsmiths, University of London, Fellow of the Royal Society of Arts, and author of The Divide: A Brief Guide to Global Inequality and its Solutions)

Book Title
Social Evolution, Political Psychology, and the Media in Democracy
Book Subtitle
The Invisible Hand in the U.S. Marketplace of Ideas
Authors
Copyright
2019
Publisher
Palgrave Macmillan
Copyright Holder
The Editor(s) (if applicable) and The Author(s)