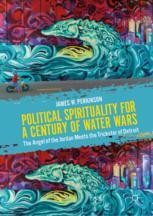 Political Spirituality for a Century of Water Wars

The Angel of the Jordan Meets the Trickster of Detroit

This book offers resources for re-imagining the biblical vision of water for a time quickly emerging as “the century of water wars.” It takes its urgency from the author’s 5-year activist engagement with a grass-roots-led social movement, pushing back on Detroit water shutoffs as global climate crises intensify.  Concerned with both white supremacist “biopolitics” and continuing settler colonial reliance on the Doctrine of Christian Discovery, and beholden to an interreligious methodology of “crossing over and coming back,” the text creatively re-reads the biblical tradition under tutelage to the mythologies and practices of various indigenous cultures (Algonquian/Huron, Haitian/Vodouisant, and Celtic/Norman) whose embrace of water is animate and spiritual as well as political and communal. Not enough, today, merely to engage the political battle over water rights, however; indigenous wisdom and biblical prophecy alike insist that recovery of water spirituality is central to a sustainable future.

James W. Perkinson is a long-time activist/educator/poet from inner city Detroit, teaching as Professor of Social Ethics at the Ecumenical Theological Seminary and lecturing in Intercultural Communication Studies at the University of Oakland (Michigan).

“The privatization (and commodification) of water poses a serious threat to life on our planet, even as it poses most immediate threats to poorer communities (think Detroit and Flint MI) and especially to Native communities (think Standing Rock and DAPL or the Alberta Tar Sands). Jim Perkinson does a masterful job of laying out the issues, bringing together the Native landscape and our traditions with African American traditions and a powerful reading of his own euro-Christian texts.” (Tink Tinker (wazhazhe/Osage Nation), Iliff School of Theology, USA)

“Perkinson has both the academic wherewithal and the Detroit direct action street cred to plumb the eddies and deeps of history - local, Indigenous, biblical. By such ancestry he is summoning us to the animate universe in this moment. Scriptural ‘principalities’ find their names, analogies, and idiom in mythic narrative. The earth is aflood with divine voices, including that of water herself, our dearest kin whose struggle in neighborhood and planet we best join as ally.” (Bill Wylie-Kellermann, author of Where the Water Goes Around (2017) and Methodist pastor)

“This is a superb ecoanarchistic reading of biblical stories against the backdrop of the corporate and racist water politics within the Motor City region of today. It uncovers the origins of the Jesus movement in nomadic economies, solidarity with the poor, and resistance to imperial control. Perkinson’s new book will elucidate for readers Christianity’s true beginnings, its historic wrong turns, and provide a road map for the future that is personally liberating and politically transformative.” (Mark I. Wallace, Swarthmore College, USA)

“This is a timely study of a problem that will only increase in urgency in the coming years – the growing water crisis. Perkinson addresses with clarity and power the roots of the crisis in climate change and social injustice. He describes as well how a responsible engagement with the crisis requires a spiritually grounded engagement with systemic injustice and with technological structures of environmentally sustainable water use. His focus is the crisis in Detroit, yet the implications of his analysis are global in scope. A compelling call to action grounded in honesty, gratitude and respect!” (Sharon D. Welch, Meadville Lombard Theological School, USA)

Book Title
Political Spirituality for a Century of Water Wars
Book Subtitle
The Angel of the Jordan Meets the Trickster of Detroit
Authors
Copyright
2019
Publisher
Palgrave Macmillan
Copyright Holder
The Editor(s) (if applicable) and The Author(s), under exclusive license to Springer Nature Switzerland AG, part of Springer Nature