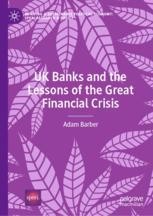 UK Banks and the Lessons of the Great Financial Crisis

This book demonstrates the variation in the reaction of the UK’s ‘big four’ banks – RBS, Lloyds, Barclays and HSBC – to the Great Financial Crisis 2008. Over a decade on from the financial crisis, this book asks: have banks in the UK learned lessons from the crisis? Bank learning in the UK after the Great Financial Crisis is something we need to know more about. Whether banks are now safer and more likely to aid rather than disrupt the economy are important questions of social relevance. Through a documentary analysis of Britain’s ‘big four’ banks in the post-crisis decade (2008–2018), this book demonstrates that while some institutions have become more risk averse and display positive signs of learning, others have shown little evidence of change. The book uses notions of agency, path dependency and structural competitive pressures to explain these inter-bank variations of behaviour. This book contributes to wider post-crash structural debates about growth, markets, and regulatory reform, showing how the agency of banks has played a vital role in driving the reform process.

Adam Barber is Senior Research Associate at the Future Economies Research Centre at Manchester Metropolitan University, UK. He completed his Ph.D. research at the Sheffield Political Economy Research Institute (SPERI) at the University of Sheffield, UK. His work focuses upon banking reform and financial governance since the Great Financial Crisis of 2008 and sits at the intersection international political economy, EU studies, and British politics. Adam’s research examines the financial crisis, the role of British banks in the global economy, the reform process post-crisis, and the strategic positioning of the City of London after Brexit. Adam is the author of a large number of research reports and policy papers. His research has been covered extensively in the media including: The Financial Times; The Guardian; BBC; Al Jazeera America amongst others. He blogs regularly at SPERI Comment, Open Democracy, and the LSE British Politics and Policy Blog.

‘Barber’s book offers a hugely important contribution to the field of political economy – and social science more generally. The novel “learning” framework Barber applies to UK banks in the wake of the 2008 crisis is both sensible and innovative, and enables a fresh set of insights about the diverse – and diversifying – characteristics of the UK banking sector. I have learned a lot from Barber’s research, and the book deserves to be widely read’.

‘Adam Barber observes that regulators, bankers and politicians have all promised to learn lessons from the 2008 financial crisis. This book asks whether, more than a decade on, they have done so. The answer he provides is nuanced and convincing and moves us beyond the binary alternatives of arguing that everything has changed or that nothing has changed’.

‘Britain’s “Big Four” banks – RBS, Lloyds, Barclays and HSBC – were at the centre of the maelstrom of 2008. In this book, Adam Barber expertly charts how the crisis impacted differentially on the business models and internal governance structures of these major banking institutions. Extensive empirical work and a robust theoretical framework combine to illuminate important continuities and changes within these systemically important financial institutions. This book will be of great utility to anyone interested in banking, finance, institutionalism, British political economy as well as the wider legacy of the 2008 crash’.

—Scott Lavery, Lecturer in the Department of Politics and International Relations, University of Sheffield, UK