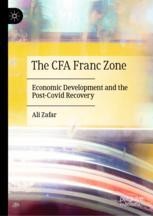 Economic Development and the Post-Covid Recovery

This book provides an empirical analysis of economic and political structures impacting the CFA franc zone. Concise and practical chapters explore the history of the CFA franc zone, challenges to development, geopolitical issues, the importance of flexible exchanges rates, growth trends, and the impact of the Covid crisis. Policy reform is examined to detail economic approaches that could reduce poverty and increase the quality of life within the area.

This book aims to present a macroeconomic and exchange rate framework to promote development and post-Covid recovery within the CFA franc zone. It will be of interest to students, researchers, and policymakers involved in African economics, the political economy, and development economics.

Ali Zafar is a macroeconomist and private sector specialist with more than 20 years of experience researching policy and advising governments in sub-Saharan Africa, South Asia, and the Middle East. Over the course of his career he has served as a Senior Economist with the International Finance Corporation and World Bank, as well as a consultant to the United Nations, Gates Foundation, and USAID.

Veterans of Africa's development usually say that the countries in the CFA zone face the same challenges as the rest of the continent. It is just that they face them all at once, have little analysis of the causes, and cannot talk about their currency arrangement. That is about right. This book is a pioneer attempt at filling the knowledge gap that has, for far too long, prevented governments--and the army of donors, financiers, and academics who support them--from articulating an agenda that unleashes the economic potential of a region the world has left behind. From poverty to migration, from governance to extractives, and from business climate to climate change, it is all here. And to the delight of macroeconomists, Zafar looks at the CFA regime right in the eye: is it a vestige of colonial times or is it still the right exchange rate policy when institutions are weak and trade shocks are frequent? His answers are path-breaking and kick off a debate that is as fascinating as it is overdue.

Marcelo Giugale, Professor at Georgetown University and former Director of the World Bank's Department of Financial Advisory and Banking Services

When monetary unions were first established in Africa, there were reasons to believe that they might reduce transaction costs by integrating economies of member countries and promoting market efficiency, both of which should have led to better economic performance in the member countries. This book shows us how CFA Franc zones have failed to promote strong economic growth. It presents the glaring problems of institutional design in two CFA Franc Zones in Francophone Africa. It exposes how political interests, both in Africa and France, trumped the functioning of monetary and fiscal institutions.

Exchange rate management is among the most important policy instruments for use by a country in its quest for rapid economic growth and external balance.  Yet for over 75 years, the 14 countries of the CFA zone in Africa did not have this choice, having kept the same exchange rate and monetary arrangements with their colonial power, France.  Very few studies have been pursued on this issue; it is as if the world has largely passed by these countries.  Zafar fills this important knowledge gap by carefully dissecting the CFA zone, reviewing its history and analyzing the effects of the fixed exchange rate regime on these economies.  He makes a substantive contribution to the current policy debate by evaluating the development outcome of this currency arrangement from different economic and political perspectives. This is a fascinating and must-read book for policy makers and anyone interested in Africa development.