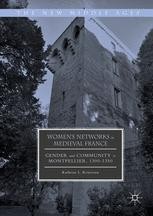 This book illuminates the connections and interaction among women and between women and men during the medieval period. To do this, Kathryn L. Reyerson focuses specifically on the experiences of Agnes de Bossones, widow of a changer of the mercantile elite of Montpellier. Agnes was a real estate mogul and a patron of philanthropic institutions that permitted lower strata women to survive and thrive in a mature urban economy of the period before 1350. Notably, Montpellier was a large urban center in southern France.  Linkages stretched horizontally and vertically in this robust urban environment, mitigating the restrictions of patriarchy and the constraints of gender. Using the story of Agnes de Bossones as a vehicle to larger discussions about gender, this book highlights the undeniable impact that networks had on women’s mobility and navigation within a restrictive medieval society.

Kathryn L. Reyerson is Professor of History and founding Director of the Center for Medieval Studies at the University of Minnesota, USA.  She has written books and articles on business, law, and trade in medieval Europe and the Mediterranean world.

“Reyerson’s study offers a visual glimpse into a late-medieval city, shedding light not just on the individuals … . Ultimately, Reyerson has produced an important contribution to the historiography of the late Middle Ages that is as enjoyable to read as it is scholarly significant. Her work will no doubt appeal to a wide range of scholars, including those interested in gender, the late-medieval economy, the formulation of social networks, and the configuration of urban spaces.” (Erin Jordan, H-France Review, Vol. 18 (39), February, 2018)

“Drawing on an impressive array of archival material, Kathryn L. Reyerson illuminates an aspect of pre-modern urban society that we rarely see: women’s networks forged not only through marriage and family, but also through business, apprenticeship, immigration, and charity. By focusing on the stories of particular women in early fourteenth-century Montpellier, she encourages us to hear the female voices that are too often silenced and unacknowledged.” (Maryanne Kowaleski, Joseph Fitzpatrick S.J. Distinguished Professor of History and Medieval Studies, Fordham University, USA)

“Kathryn L. Reyerson’s new book offers a compelling and important window onto the world of women in the southern French city of Montpellier at the end of the Middle Ages. Deftly weaving the remarkable account of one woman, Agnes de Bossones, through her narrative, Reyerson details the overlapping and abutting worlds of women in the later Middle Ages. The author is an unquestioned authority on the city and its documents—this book is a welcome addition to her previous work.” (Anne E. Lester, Associate Professor of History, University of Colorado at Boulder, USA)

“Reyerson has made the legal documents of Montpellier into a fascinating study of the networks centered around widow Agnes de Bossones. A comprehensive and dynamic picture of life of women of all ranks, including the elite, the prostitutes, and a charitable club. It is easy to picture life of these women and of a medieval city.” (Barbara Hanawalt, Emeritus Professor of History, The Ohio State University, USA)