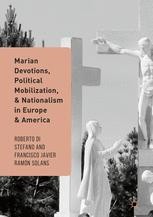 Marian Devotions, Political Mobilization, and Nationalism in Europe and America

This volume examines the changing role of Marian devotion in politics, public life, and popular culture in Western Europe and America during the nineteenth and twentieth centuries. The book brings together, for the first time, studies on Marian devotions across the Atlantic, tracing their role as a rallying point to fight secularization, adversarial ideologies, and rival religions.
This transnational approach illuminates the deep transformations of devotional cultures across the world. Catholics adopted modern means and new types of religious expression to foster mass devotions that epitomized the catholic essence of the “nation.” In many ways, the development of Marian devotions across the world is also a response to the questioning of Pope Sovereignty. These devotional transformations followed an Ultramontane pattern inspired not only by Rome but also by other successful models approved by the Vatican such as Lourdes. Collectively, they shed new light on the process of globalization and centralization of Catholicism.

“This is a rich and stimulating survey of the cult of Mary centered on important shrines of Europe and the Americas in the nineteenth and twentieth centuries; the authors pay particular attention to the political context of secularizing states and demonstrate convincingly the mobilizing attraction of this female figure when associated with landscape, place and nation.” (William A. Christian, Religious Scholar, USA )

“Ably introduced by Roberto Di Stefano and Javier Ramón Solans, these essays offer exciting opportunities for fresh thinking about the paradox of secular nation-building and intense religiosity centered on Marian devotion in the combustible politics and transformations of Catholic Europe and Latin America since the mid-nineteenth century. Attending to transnational as well as national and regional developments—with the example of Lourdes looming large—the authors find tracks of Romanization, ecclesiastical promotion, immigration, pilgrimage, religious tourism, and Durkheim’s “contagiousness of the sacred” that begin to connect an array of richly-described places and times.” (William B. Taylor, University of California, Berkeley)

“The politicization of Marian devotions, that strongly characterized Catholicism during the nineteenth and twentieth centuries, has been reported in recent studies. This book allows us to understand, for the first time, this phenomenon in all its significance. Not only because it offers a persuasive chronological frame for its secular development but above all because, by using up-to-date methodologies, it enable us to appreciate the circulation of this phenomenon (center-periphery, Europe-America, Church-world) that shaped contemporary culture. A seminal book.” (Daniele Menozzi, Scuola Normale Superiore di Pisa)