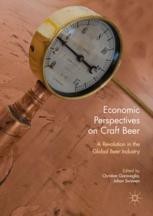 A Revolution in the Global Beer Industry

This book investigates the birth and evolution of craft breweries around the world. Microbrewery, brewpub, artisanal brewery, henceforth craft brewery, are terms referred to a new kind of production in the brewing industry contraposed to the mass production of beer, which has started and diffused in almost all industrialized countries in the last decades. This project provides an explanation of the entrepreneurial dynamics behind these new firms from an economic perspective.

The product standardization of large producers, the emergence of a new more sophisticated demand and set of consumers, the effect of contagion, and technology aspects are analyzed as the main determinants behind this ‘revolution’. The worldwide perspective makes the project distinctive, presenting cases from many relevant countries, including the USA, Australia, Japan, China, UK, Belgium, Italy and many other EU countries.

Christian Garavaglia is Assistant Professor at the Department of Economics Management and Statistics, University of Milano-Bicocca, and Research Affiliate at the ICRIOS (The Invernizzi Center for Research on Innovation, Organization, Strategy and Entrepreneurship), Bocconi University, Italy. His research interests include industrial organization, industrial dynamics, industry evolution, the economics of beer and consumer preferences for food.

Johan Swinnen is Professor of Economics and Director of the LICOS Centre for Institutions and Economic Performance at the University of Leuven (KUL), Belgium. He is also Senior Research Fellow at the Centre for European Policy Studies (CEPS), Brussels, where he directs the programme on EU agricultural and rural policy. He was previously Lead Economist at the World Bank and Economic Advisor at the European Commission. He consults for the OECD, FAO, EBRD, UNDP, IFAD and to several Governments, and was coordinator of several international research networks on food policy, institutional reforms, and economic development. He was President-elect of the International Association of Agricultural Economists, a Fellow of the European Association of Agricultural Economists and President of the Beeronomics Society. He has published widely on political economy, institutional reform, trade, agricultural and food policy.