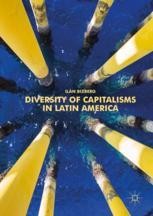 Diversity of Capitalisms in Latin America

“One of the definite merits of this book is to cleverly mix a theoretical breakthrough with a meticulous historical and empirical account of the transformations of some key Latin American countries. First, it is at the frontier of a research agenda initiated back to the end of the 1970s, second it clearly distinguishes between an ideal-type approach and the complexity of any specific national configuration and its transformation in history. Furthermore, the author provides decisive arguments against a pure economic determinism too frequently supposed to govern institutions building and reforms. Last but not least, the book culminates by an impressive analysis of the crises that quite any Latin America society experiences at the end the 2010s.”
-Robert Boyer, Institut des Amériques, Paris, France.
This book defends the idea that there are significant structural and institutional differences between the countries in Latin America. Building off the results of a four-year research project, Bizberg argues against the idea that in Latin America there is one single type of capitalism—a hierarchical one—that is entangled in a vicious cycle. Rather, there are clusters of countries that have had similar historical trajectories, analogous structures, or comparable reactions to changes to the world economy, but have not all followed the same mode of development. Just as analysts have found a variety of capitalisms in developed countries, it is possible to identify the emergence of different types of capitalism in Latin America since the 1980s debt crisis. These varieties of capitalism are defined according to categories—including the articulation to the world economy, the role of the State, the structure of the political system and the action of civil society—which give rise to distinct wage relations, comprising the industrial relations system and the welfare regime.

Ilan Bizberg is Professor and Researcher at El Colegio de México; associate member of the CADIS/EHESS, Paris, associate professor of the Internationales Graduiertenkolleg “Zwischen Räumen” of the Freie Universität Berlin, and member of the CEIM-UQAM, Canada.

“Is there a unique mode of development in Latin America, or a great diversity, each country being different from others? Between these two extreme scientific positions, Ilan Bizberg explores another perspective, and builds and uses a typology distinguishing various modes of development, i.e. various capitalisms. An inspiring and innovative demonstration, based on a very solid knowledge both of Latin America, and of economical and sociological theories, including the French Regulation School.” (Michel Wieviorka, Président of FMSH and Directeur d'études à l'EHESS, France)

“This is a groundbreaking book in three aspects. Between the extremes of too global and too narrow studies it analyses the trajectories of four different types of capitalisms in Latin America. Second, it presents a rich body of empirical data and historical perspective integrating a political economy with a sociological view (accumulation regime, global connectedness, labor markets, political regime, socio-political power groups and coalitions, labor regulation) always considering long-term historical factors. Finally, it critically integrates carefully different theoretical concepts on comparative social science. Although not explicitly building on the classic Latin-American theory of dependence Bizberg presents a highly stimulating analysis that is worth to be considered as a new landmark in the long tradition of theory-driven and empirically grounded comparative studies. It should be on the syllabus of any Master or PhD course related to Latin-American studies and to comparative studies of capitalisms.” (Ludger Pries, Ruhr-University Bochum, Germany)

“Latin America is a maze; Ilan Bizberg searches to make sense of it, using as a tool the diversity of capitalisms, but he is wise enough to leave the solution of the puzzle to the reader. Several are rentier countries exporting commodities; most are outward-looking, liberal and deeply dependent countries; all are falling behind, including Brazil, which searched to be a developmental and social exception but failed.” (Luiz Carlos Bresser-Pereira, Emeritus professor of Getúlio Vargas Foundation, Brazil)