Youthquake II: Young Cosmopolitans and the Deepening of Intergenerational Politics

The 2017 UK General Election was a landmark contest in many ways. In our 2019 Open Access book, “Youthquake 2017: The Rise of Young Cosmopolitans in Britain”, we highlighted a huge surge in youth political engagement. First of all, there was a spike in youth turnout (amongst 18 to 24 year olds), rising to the highest level for a quarter of a century. Second, we identified a dramatic rise in support for the Labour Party amongst young voters founded on a growth in social liberal or ‘cosmopolitan values’. A historic 60% of the youngest cohort of voters supported the Labour Party.

As we wrote at the time, the left-wing orientation of younger voters was rooted in the negative impact of austerity (cuts in public spending) on younger generations. This cosmopolitan turn was underpinned by their relaxed attitudes towards immigration and support for the idea of cultural diversity, and manifested itself in mass youth engagement in the 2016 EU referendum (when around three quarters of those 18-24 year olds who turned out voted Remain).

Clearly these trends are not common to all young people (and were most common amongst students, young women, and young ethnic minority citizens), but the 2016 and 2017 votes demonstrated the remarkable rise of young cosmopolitans as a political force. The emergence of this political force is not confined to the UK or to political parties. It can be observed in most other post-industrial democracies – in electoral politics and protest movements: from Prime Minister Jacinda Ardern in New Zealand, to international climate campaigner Greta Thunberg and through to the wider and on-going youth leadership of the pro-democracy protests in Hong Kong.

Since the 2017 UK General Election, we have witnessed a further surge – a youthquake in youth participation in response to the deepening climate crisis. Politically engaged young people across the world have joined a wave of political protest against climate change, which also has electoral consequences. In the 2019 European Parliament election, the Green Party performed well in many countries – in particular, scoring 30% amongst the under 30s in Germany (as much as the next three parties put together). We see this as further evidence of the rise of young cosmopolitans. In the UK, YouGov figures now show the environment as the second most important issue (next to Brexit) for young adults aged 18-29 (Brexit 55%, the environment 42%). By way of contrast, while Brexit is overwhelmingly prioritised amongst those aged 60-69 (73%) and the 70-plus age group (75%), the environment is only the 6th most important issue for these two older groups (YouGov).

In 2017, age replaced class as the most important predictor of party support. At the time, we believed that the scale of these intergenerational cleavages would not be surpassed. In fact, the current polling data indicates the opposite. Whilst the Labour Party’s historic support amongst younger voters aged 18-29 of over 60% seems to have waned somewhat since the 2017 UK General Election, it has strengthened during the course of the current campaign - it is up from 38% in YouGov’s 17-28th October 2019 poll, to 51% in their 12-20th November 2019 YouGov poll. Furthermore, as Figure 1 clearly indicates, the main beneficiary of Labour’s youth vote since 2017 is not the Conservative Party. In fact, Conservative support amongst 18-29 year olds has dropped to just 20% - representing a Labour-Conservative youth gap of over 30%. The reverse is true of support for the two main parties amongst older voters. Amongst the over 70s, support for Labour has fallen to only 10%. 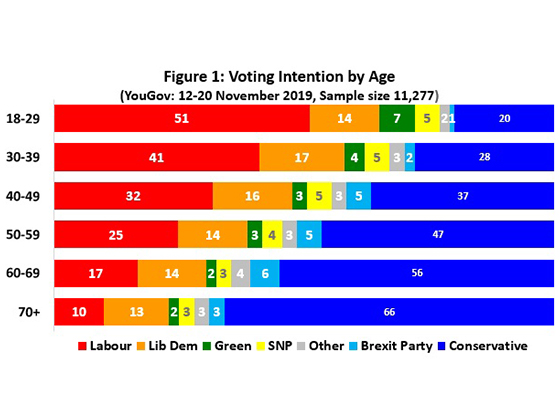 According to the polls, some of the youth support for Labour has transferred along cosmopolitan cleavages to the Green Party and to the Liberal Democrats. For young cosmopolitans who prioritise Brexit, Labour’s “neutral” position is arguably trumped by the Liberal Democrat’s unequivocal support for revoking Article 50 so that Britain retains membership of the EU. For some young cosmopolitans who prioritise the environment, voting for the Green Party is the only real response to climate change. However, it is interesting to note that as the election draws near, their support has been squeezed by Labour from 15% in YouGov’s October poll to 7% in the November poll (in Figure 1), perhaps reflecting Labour’s prioritising of the proposed Green Industrial Revolution.

As we explained in our book, the period effect of the youthquake rippled up the generations. We can see this when we compare the political allegiances of 18-29s with those of 30-39s in recent polling. Both age groups show majority support for Labour, Greens and the SNP, representing support for a politics that is broadly progressive, anti-austerity/left-ist, cosmopolitan and at least “open-minded” about retaining EU membership (Labour), if not entirely “Remain” supporting (Greens and SNP). This chimes with our findings about the emergence of young cosmopolitans as a political force. In 2019, we can comfortably apply this to 18-39s.

Youth participation in 2019 is hard to predict. The electoral registration of young people in 2019 markedly outpaced the registration rate of Britain’s youth at the same point within the 2017 electoral cycle – and over a million people aged under 35 signed-up to vote during the final five days of the #GE2019 eligibility period.  Of course, registering to vote is not the same as actually voting, but the spike in youth electoral registration in 2019 compared to 2017 is an important indicator of young people’s engagement with the election – and may herald that another youthquake is on the horizon.  However, disappointment with Labour’s position on Brexit and the environmental turn are likely to crunch up against the reality of the UK’s first-past-the-post system. Will the large increase in youth support for the LibDems and Greens hold up as it seems to now be falling as the campaign enters its final phase? How many young people will decide to vote tactically against an unambiguously Brexit-prioritising Conservative Party? Or will frustration with the futility of voting LibDem or Green, and frustration with Corbyn’s Labour Party persuade younger voters to abstain?

Whatever happens in the 2019 UK General Election, young people will continue to be engaged in politics by other means – from street demonstrations for Remain, to school strikes against climate change and to direct action through Extinction Rebellion. If the recent years have shown us anything, it is that the arena of electoral politics is diminishing, paralyzed by political polarization, while youth politics is increasingly bubbling up through social movements and other digitally networked forms of citizen action.

James Sloam is Reader in Politics at Royal Holloway, University of London, UK, and series editor of Palgrave Studies in Young People and Politics. 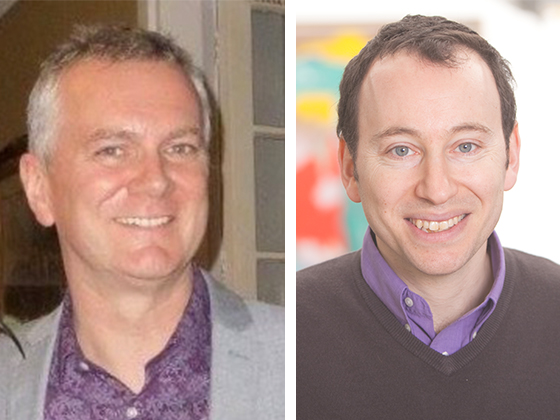 Books in the Palgrave Studies in Young People and Politics series