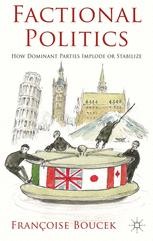 How Dominant Parties Implode or Stabilize

Drawing on theories of neo-institutionalism to show how institutions shape dissident behaviour, Boucek develops new ways of measuring factionalism and explains its effects on office tenure. In each of the four cases - from Britain, Canada, Italy and Japan - intra-party dynamics are analyzed through times series and rational choice tools.

FRANÇOISE BOUCEK is a Teaching Fellow in European Politics in the School of Politics and International Relations at Queen Mary University of London, a Visiting Professor at the University of Witten Herdecke (Germany) and an Associate of the LSE Public Policy Group. Her research interests include political parties and party systems, party government and representative democracy.

intra-party politics. By challenging the unitary actor assumption of

inter-party accounts, she offers a fuller picture of both the maintenance and the decline of single-party dominance. She highlights the importance of institutional incentives and electoral market conditions in shaping the behaviour of factions within a dominant party, and hence its ability to maintain its dominant position.'

'Boucek's study provides a new benchmark for the analysis of how political parties really operate. Its rich comparative analysis of the dynamic relationship between factionalism and party dominance opens new windows into understanding the importance of intra-party organization and life in structuring competitive democratic politics.'

'Why are dominant parties so factionalized, and with what consequences?, This is the crucial question at the core of this original study of political parties in power for extended periods. Combining elements of rational choice and historical institutionalism and investigating four major cases in Britain, Canada, Italy, and Japan, Françoise Boucek uncovers the paradoxical positive and negative functions that factionalism performs and the variables that affect stability and change in these parties. A truly creative, systematic and ground-breaking addition to the literature on political parties.'