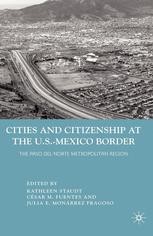 Cities and Citizenship at the U.S.-Mexico Border

The volume is a cutting-edge, interdisciplinary approach to analyzing an enormously significant region in ways that clarify the kind of everyday life and work that is generated in a major urban global manufacturing site amid insecurity, inequality, and a virtually absent state.

CÉSAR FUENTES is Economist and Research Professor at the COLEF/Ciudad Juárez, USA.

"This book is a major contribution to the understanding of the multiscalar processes of globalization set forth by Neil Brenner and Saskia Sassen and the challenges local governments face. The authors...have an understanding based on extensive research experience in the border region. They provide a pioneering and comprehensive analysis of this transnational urban space that is at the epicenter of globalization, cross-border trade, and border control...The analysis would be useful to border scholars and to public policy makers in other border regions who face similar challenges. Summing Up: Highly recommended." - CHOICE

"This groundbreaking interdisciplinary edited collection embodies the social commitment and the kind of scholarly collaboration deeply indispensable, both within and across nation-states, to more effectively confront the socio-political, cultural, and policy-making challenges associated with global border regions, such as Paso del Norte, around the world. Ultimately, this fascinating volume is the extraordinary result of a rare and rigorous collective dialogue among and between Mexico and U.S.-based scholars, all of whom not only have studied the region for years, but have also experienced, either directly or indirectly, the impact of twenty-first century border life in its multiple dimensions: from the absent state to the empty curriculum, from organized crime to disorganized urban planning and border violence, from the triumphs of global capital to local labor and community struggles." - Alejandro Lugo, author of Fragmented Lives, Assembled Parts: Culture, Capitalism, and Conquest at the U.S.-Mexico Border

"Recent events have again placed Ciudad Juarez in the head lines of print media all over the world, confirming not only the dynamics of an international border community but the need to better understand the complex processes of interactions across the border that are behind such dynamics. This book contributes significantly to such an understanding. Its emphasis on the categories of space and state brings cohesion to the analysis of the wide array of border problems that go from the harmonious to the violent in settings of social and economic relations. No wonder the U.S.-Mexico border has been viewed as both, uniting and dividing two nations and/or two societies that have succeeded and failed at different points in time when facing the challenges of the asymmetries of power that characterize the bilateral relations between them. This book comes at an excellent time, fulfilling a need to understand the U.S.-Mexico border from a more scientifically based approach that allows its analysis to surface above prejudice and stereotypes." - Jorge A. Bustamante, Founder and former President, El Colegio de la Frontera Norte