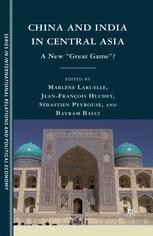 China and India in Central Asia

This book looks at how China and India's growing interests in Central Asia disrupt the traditional Russia-U.S. 'Great Game' at the heart of the old continent. In the years to come, both Asian powers are looking to redeploy their rivalry on the Central Asian and Afghan theatres on a geopolitical, but also political and economic level.

"Marlène Laruelle and Jean-François Huchet have assembled a talented group of scholars from Europe, India, China, and Australia to assess the neglected Sino-Indian dimension of Central Asia's twenty-first century 'Great Game.' These insightful essays are a valuable addition to our understanding of great-power politics in this complex and vital region and will be of interest to specialists and general readers alike." - Charles E. Ziegler, Professor and University Scholar, Department of Political Science, University of Louisville, USA

"China and India in Central Asia is a timely book which deals with one of the regions of the world where our future is being written. Two Asian giants in urgent need of natural resources to sustain their growth are bordering Central Asian countries which are among the richest area for minerals, oil and gas. But Central Asia is also at the heart of the new 'Great game' because of the Afghan war and the spread of Islamism, two causes of concern for Beijing and New Delhi. Will they cooperate to build a better world? Will they fight? The book sets the terms of analysis." - Christophe Jaffrelot, CERI-Sciences Po/CNRS, France

"The volume contributes to the growing literature on Central Asia by focusing on a rather neglected dimension, the regional implications of China-India interactions. It approaches the problem of China-India relations from a wide range of regional and disciplinary perspectives and the volume involves a diverse group of scholars from Central Asia, China, India, and Europe." - Elizabeth Wishnick, Associate Professor of Political Science, Montclair State University and Adjunct Associate Research Scholar, Weatherhead East Asian Institute, Columbia University, USA