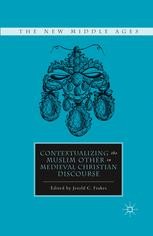 Contextualizing the Muslim Other in Medieval Christian Discourse

"Any medievalist, reading one or more of these essays, will find the information enlightening." - Journal of English and Germanic Philology

"Contextualizing the Muslim Other in Medieval Christian Discourse moves beyond the usual language groups of Latin, English, and French to explore local accounts of religious encounter in the borderlands, including Ireland, Spain, Armenia, and the Slavic-speaking regions of eastern Europe, with special attention to the richness of medieval German visions of Islam. Its essays, written by senior scholars in the field as well as newer voices, engage deeply with the dynamics of space and enclosure to give new insights into pre-modern practices of community formation through ideologies of exclusion." - Suzanne Conklin Akbari, Professor of English and Medieval Studies, University of Toronto

"[This book]focuses closely on a single important subject - the Muslim other in the European Middle Ages - across a wide diversity of geographical regions, languages, literatures, and cultures. From Iberia in the west to Kosovo in eastern Europe; from Wales, Ireland, and England in the north to Armenia and crusader Outremer in the Mediterranean, and spanning the varied ways in which Africa and Asia were imagined, this volume finely complicates and recalibrates our understanding of how Europe engaged with the reality and the idea of Muslims in the long centuries of its Middle Ages, with important ramifications for later time. The volume's mix of approaches, methods, and theories - and its conjoining of new voices with the voices of senior scholars - is laudable and particularly welcome." - Geraldine Heng, founder and co-director of the Global Middle Ages Projects (G-MAP), Perceval Associate Professor of English, Middle Eastern Studies, and Women's Studies, University of Texas, and author of Empire of Magic: Medieval Romance and the Politics of Cultural Fantasy