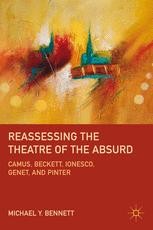 Reassessing the Theatre of the Absurd

Fifty years after the publication of Martin Esslin's The Theatre of the Absurd , which suggests that 'absurd' plays purport the meaninglessness of life, this book uses the works of five major playwrights of the 1950s to provide a timely reassessment of one of the most important theatre 'movements' of the 20th century.

Michael Y. Bennett is Associate Professor of English at the University of Wisconsin-Whitewater, USA, where he teaches courses on modern drama. He is the author of Reassessing the Theatre of the Absurd (2011/2013), Words, Space, and the Audience (2012), and Narrating the Past through Theatre (2012). He is the editor of Refiguring Oscar Wilde's Salome (2011); and the co-editor of Eugene O'Neill's One-Act Plays: New Critical Perspectives (2012) as well as editor of The Edward Albee Review .

"Michael Y. Bennett's new book, Reassessing the Theatre of the Absurd, is an ambitious text fifty years in the making . . . [It] is a terrific first book. Bennett's bravery in challenging the theoretical canon is a great example to follow." - Journal of Modern Literature

"In Reassessing the Theatre of the Absurd: Camus, Beckett, Ionesco, Genet, and Pinter, Michael Y. Bennett turns Esslin's text on its head to offer more nuanced, more hopeful analyses of these canonical playwrights . . . Not only does he offer provocative, convincing readings of these plays, he also broadens his analysis to include works by contemporaries of the original 'absurdists,' and by those of different historical moments and/or gender. This move not only extends his interpretive framework beyond the oft covered territory that is the focus of this book, it also extends the life of his analysis. Bennett's work is strengthened by the fact that his writing style is approachable and his work well signposted." - Theatre Survey

"The plays discussed by Esslin and Bennett, including their works - The Theatre of the Absurd and Reassessing the Theatre of the Absurd respectively - make a 'double reed flute' . . . To the audiences used to listening to the melody that echoes the experimentations in the domain of dramaturgy and theatre art of the 1940s and 1950s in Europe, Bennett's work secretly tells them to listen to another melody. The melody that Bennett is trying to make us hear tells that beyond the moribund situation in our life and society, there is always hope . . . Bennett and Esslin do not replace each other but form a cohort . . . With one end we listen to a melody composed in 1960s, and from another end, we listen to the one orchestrated by a very talented theater critic from the young generation of our times." - Journal of Philosophy: A Cross-Disciplinary Inquiry

"In the chapters following the introductory debates, Bennett moves . . . to a more detailed examination of each individual play, and in this scrupulous analysis, I believe, lies the strength of this critical study . . . I applaud the author's attempts at vigorous reassessment of standard idioms and traditional methodologies in broadening an established canon of absurdist drama." - Text & Presentation