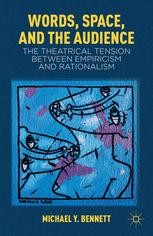 Words, Space, and the Audience

The Theatrical Tension between Empiricism and Rationalism

In this unique study, Michael Y. Bennett re-reads four influential modern plays alongside their contemporary debates between rationalism and empiricism to show how these monumental achievements were thoroughly a product of their time, but also universal in their epistemological quest to understand the world through a rational and/or empirical model. Bennett contends that these plays directly engage in their contemporary epistemological debates rather than through the lens of a specific philosophy. Besides producing new, insightful readings of heavily-studied plays, the interdisciplinary (historical, philosophical, dramatic, theatrical, and literary) frame Bennett constructs allows him to investigate one of the most fundamental questions of the theatre - how does meaning get made? Bennett suggests that the key to unlocking theatrical meaning is exploring the tension between empirical and rational modes of understanding. The book concludes with an interview with performance artist Coco Fusco.

Michael Y. Bennett is Associate Professor of English and affiliated faculty in Philosophy at the University of Wisconsin-Whitewater, USA, where he teaches courses on modern drama. He is the author of: Reassessing the Theatre of the Absurd (2011/2013); Words, Space, and the Audience (2012); Narrating the Past through Theatre (2012). He is the editor of Refiguring Oscar Wilde s Salome (2011) and the co-editor of Eugene O'Neill's One-Act Plays (2012). He is also Editor of The Edward Albee Review.

'Through thoughtfully researched and engagingly argued case-studies, Bennett accomplishes two overlapping aims: to offer new readings of these canonical works and, more significantly, to develop a heuristic for considering the key question from reception theory [i.e., 'how does meaning get made in the theatre?'] as it relates to modern dramatic texts . . . In all, these chapters were an exemplum of new historicism in the ways they discussed the interplay and interdependence of philosophy, history, politics, and drama . . . The reason that Bennett's argument proves so effective is that he carefully traces the tensions between empiricism and rationalism . . . Because of this, Bennett's argument has far-reaching implications for considering other dramatic texts and for theatrical performance . . . Words, Space, and the Audience is a welcome addition to the field of reception theory.' - Journal of Philosophy: A Cross-Disciplinary Inquiry

"Complex notions of individual subjectivity are the subject of Michael Y. Bennett's Words, Space, and the Audience: The Theatrical Tension between Empiricism and Rationalism, which includes a chapter on Wilde's Salome and The Importance of Being Earnest . . . Bennett situates Wilde's work within Victorian debates over Hegelian idealism and British materialism, demonstrating how the two plays explore ontology and the notion of the self." - The Year's Work in English Studies

"Michael Y. Bennett's Words, Space, and the Audience provokes investigation into what will hopefully become more complex cross-fertilization between histories of philosophy and drama . . . this book provides substantive insight into histories of plays and playwrights . . . Overall, Bennett dares to ask difficult questions about the relationships between histories of thought and drama, and shows there is still much answering to be done." - Theatre Survey

"Bennett's work proves to be a valuable contribution for charting the overlap between philosophy and theatre, an overlap that could prove elucidating to scholars of dramatic literature and reception theorists alike." Theatre History Studies