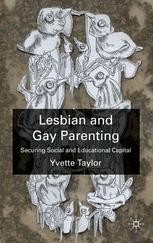 This book explores the intersections between class and sexuality in lesbians' and gay men's experiences of parenting and the everyday pathways navigated therein, from initial routes into parenting, to location preferences, schooling choice and community supports.

'Lesbian and Gay Parenting breaks new ground by showing the ways social class is central to queer families. Drawing on interviews with lesbians and gay men, Taylor's research is a must read for all serious students of sexuality, gender, and family in the Anglo-European world.' - Steven Seidman, Whitlessey Professor of sociology, American University of Beirut, Lebanon

'The classed lesbian and gay voices that Yvette Taylor brings into conversation about family indicate that class matters for family choices in ways that lesbian and gay theorists, as well as theorists of risk society, ignore at the peril of their theoretical and practical assertions.' - Valerie Lehr, Vice President of the University; Dean of Academic Affairs, St. Lawrence University, USA

'Taylor effectively interrogates how lesbian/gay 'desire to be the 'same' in accessing a range of social spheres as well as the (im)possibility of being so may be understood as classed and sexualised in its constant (de)legitimisation'...this volume makes a solid foray into this important area.' - Anne Harris, School of Education, Victoria University, Melbourne, Australia