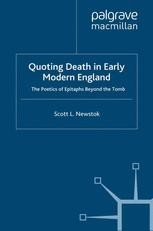 The Poetics of Epitaphs Beyond the Tomb

An innovative study of the Renaissance practice of making epitaphic gestures within other English genres. A poetics of quotation uncovers the ways in which writers including Shakespeare, Marlowe, Holinshed, Sidney, Jonson, Donne, and Elizabeth I have recited these texts within new contexts.

Scott Newstok teaches English at Rhodes College, USA. He is the author of How to Think like Shakespeare and Quoting Death in Early Modern England; editor of Paradise Lost: A Primer; and co-editor of Weyward Macbeth, a collection of essays exploring the intersection of race and performance.

“This is an exceptionally learned and sophisticated piece of writing. … provides an impressive, even disorientating amount of data, and he ties this data into clear and persuasive arguments; there is a theoretical agility about the book, which is refreshing to lock minds with, and also an intellectual authority and intensity. … this is a book that repays close attention, and is something that can be learned from.” (The Shakespeare Institute Review, Vol. 1, June, 2012)

Quoting Death adds an important element to our understanding by showing just how far the epitaph was adopted by the language and literary culture of the early modern period. . . . it offers a rewarding extension to religious and ritual culture of the time. - Joseph Sterrett, Cahiers Élisabéthains

'Quoting Death in Early Modern England is convincing about the significance of epitaphs in early modern texts... Yet the strength of the book is in its thorough and clear treatment of a subject less tangential than a reader may first suspect.'

'This is a stimulating exploration of a neglected genre and Newstok is an adroit commentator on the emergence and circulation of the early modern epitaph.'

'This lively and thought-provoking book...is an ambitious and largely successful study, encouraging us to understand not merely how Renaissance epitaphs transcended their traditional Christian commemorative functions, but how a variety of concerns with "epitaphic closure" were intimately related to an emergent idea of authorship itself.

'The very last part of the book . . . is liberated from notes, and the reader can clearly follow and appreciate Newstok's contentions. . . . he eloquently expresses all that one would seek of the nature and purpose of an epitaph. The book is attractively bound and presented, with full references and an extensive bibliography.'

'This superb study . . . builds towards particularly strong textually analytic chapters on drama and poetry. . . . This is impressively self-aware criticism. . . . The discussion achieves considerable scope, situating the epitaph in broader period debates concerning the veracity of verse, the efficacy and morality of rhetoric, and the early history of antiquarianism. This scrupulously detailed literary history of an increasingly recognised genre, coming in the same series as Andrea Brady's work on funeral elegy, helps gives the lie to Robert Musil's sense that "there is nothing in the world as invisible as monuments.'

Scott L. Newstok's Quoting Death in Early Modern England offers a compelling and well-researched study of the functions and myriad forms of epitaphs in the sixteenth and early seventeenth centuries. . . . This book deserves careful study, particularly by scholars of early modern memory and textuality, and specifically by those interested in the forms, rhetoric and afterlives of memorial texts in this period. . . . [an] intelligent and provocative study.

'A summation of these points cannot do justice to the depth of this books insight and analysis . . . this study provides an important contribution not only to the understanding of epitaphs, but to the larger literary and social context to which they belong. In this sense, it is a valuable epitaph to epitaphs, recovering their many significations, even if the here to which they refer is somewhat indeterminate, if not gone altogether.' -Sarah Covington, Renaissance Quarterly

'At its best -and its best is very good - this is a book that sheds light on the difficult interplay between a material phenomenon (the sudden proliferation of epitaphic writing that began with the end of the Middle Ages) and its textual, theatrical and rhetorical modifications. It is the slippery relationship of literature to history and chronicle writ large. Newstok's study is provocative, moreover, in stretching the boundaries of the literary to their furthest point . . . Newstok's idiom is tremendously appealing . . . His frame of reference is economical and tight. He excels above all when examining tensions and paradoxes . . . His meticulous research restrains sweeping, absolute claims, despite the fact that writing about death is so vulnerable to generalisation.' - Katherine Rundell, Essays in Criticism

'Newstok's work is of great value to historians as well as literary critics. . . . As a book that explores the changing ways that people dealt with death and the memory of the dead as England moved away from a 'medieval' way of looking at the world, Quoting Death will be of interest to a wide range of scholars and students.' - Carole Levin and Michael Hewitt, Sixteenth Century Journal

'Newstok should be commended for the sheer range of literary and historical references that he brings to bear in the book, as he effectively demonstrates the wide influence of epitaphic writing and thought in the early modern period. Future scholars will therefore find his bibliography particularly useful. Much of the material is unexpected, and a great deal is unfamiliar. The book is also well illustrated, with images of tombs and title-pages, and elegies and epitaphs. . . . Newstok has found an important subject and an interesting approach in his book.' - Angus Vine, Journal of the Northern Renaissance

'[An] engaging new study . . . amply illustrated in the author's sharp analyses . . . Newstok is especially insightful on the rhetorical possibilities of what he terms the 'epitaphic gesture.'' - Philip Major, Modern Language Review

'Throughout the study, [Newstok's] focus rests on the meta-textual status of the epitaph rather than the epitaph itself. This unique perspective of the 'inset' epitaph will help us reexamine the most economical form of literature in a much broader, interdisciplinary context.' - Miwa Saito, Notes and Queries

'Scott L. Newstok offers some real innovative research which throws new light upon the cultural significance of the genre of the epitaph in the Renaissance. . . . By focusing on the re-citation of epitaphs in texts belonging to various genres, Newstok's book goes beyond mere analyses of the epitaph as a generic tradition unto itself. . . . We are presented with a great deal of interesting material which illustrates the Renaissance practice of epitaph quotation in elegiac verses, dramatic works, historical chronicles, royal public speeches and treatises on rhetoric.'

'This well-presented book addresses a neglected area in studies of commemorative practices: the use of the epitaph as a literary genre, found in manuscript and in print as much if not more than on tombs themselves. Newstok goes beyond both studies of monuments themselves and studies of literary epitaphs . . . He argues convincingly for recognition of what he calls the "meta-textual status" of epitaphs, for understanding them as a mode of writing that saturated early modern English culture. His analysis of the use of epitaphic language as a rhetorical and poetic strategy demonstrates the omnipresence of death and memory in the literature generated by Elizabethan and early Stuart writers.'

'Quoting Death in Early Modern England exemplifies new formalism at its best. Ludic and strikingly original, the book traces the epitaph's development from actual inscriptions on tombs to the summations that eventually marked the end of elegies. . . . An innovative stylist, Newstok writes in short, carefully honed sections that frequently stand apart as brilliant mini-essays in their own right. In the speed and intellectual elegance with which he moves from historical specifics to meditations on aesthetics and the pathos of humanity's efforts to overdo death, Newstok becomes a latter-day Thomas Browne.'

'The subject of this book could not but be interdisciplinary, and Newstok rises to the challenge. There is something here for a wide variety of readers.'

'Scott L. Newstok's...book breathes new life into the subject of death. In addition, who could have imagined that such a small container as the epitaph could hold so much? Clearly, Newstok did, and he reveals as much in his scholarly, yet immanently readable and often entertaining, study of this brief, but paradoxically expansive, literary genre. It is an admirably researched and thoroughly documented study.'

'Newstok's thought-provoking book is, thus, not only indispensable for Shakespeareans, but for all readers who are intrigued by the early-modern period with its hybrid genres, its surprising linguistic twists and its sustained interest in the liminal spheres between life and death.' - Norbert Lennartz, University of Vechta, English Studies