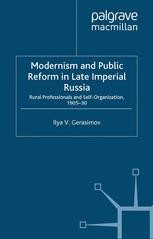 This book is a comprehensive reconstruction of the successful attempt by rural professionals in late imperial Russia to engage peasants in a common public sphere. Covers a range of aspects, from personal income and the dynamics of the job market to ideological conflicts and psychological transformation. Based on hundreds of individual life stories.

ILYA GERASIMOV holds Russian and American PhDs, and is a founder and the Executive Editor of the international
quarterly Ab Imperio dedicated to the studies of new imperial history and nationalism in the post-Soviet space (since
2000). He has published in several languages on Russian social history, the history of criminality and new imperial history.

'Ilya Gerasimov's study of agricultural modernizers in early twentieth century Russia gently smashes long-standing historical conventions. Russians into Peasants reveals the goals and careers of young activists who, between the disappointing 1905 revolution and the collapse of 1917, turned away from extremist, anti-state politics and worked with rural people to create a progressive and productive agrarian society. This is history with a human touch; Gerasimov cares about salaries and housing, as well as tractors. His fresh, independent perspective normalizes both professionals and peasants, and brings to life a forgotten generation of people who thought they could improve their society without overthrowing or occupying the state. Based on rich and unusually diverse materials agronomists' journals, provincial newspapers, the trans-Siberian train car devoted to increasing migrants' agricultural productivity, short courses and film shows addressed to the rural public Gerasimov's innovative book should change the way we look at Russian society, before 1917 and after.'

'... Gerasimov's excellent prosopography is exciting to read and undoubtedly offers a valuable reference work on the relationship of the intelligentsia with the state and the people in late imperial and early Soviet Russia.' - Alexandre Sumpf, Ab Imperio

'...this is a rich and stimulating book from which this reviewer learned a great deal and will continue to refer to, and is strongly to be recommended to other specialists in the field.' -David Moon, Durham University, Slavonica Review