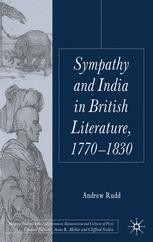 India was the object of intense sympathetic concern during the Romantic period. But what was the true nature of imaginative engagement with British India? This study explores how a range of authors, from Edmund Burke and Sir William Jones to Robert Southey and Thomas Moore, sought to come to terms with India's strangeness and distance from Britain.

ANDREW RUDD Teaches English literature at the Open University, UK. He holds a PhD from the University of Cambridge.

'Lord Kames argued that 2000 years is too great a distance in time for the passions, and that our sympathy for Lucretia is nil unless it can be excited by other means. Andrew Rudd argues that distance in space is likewise a serious impediment to sympathy, and that even the most active imagination is thwarted in its efforts to compassionate misery and injustice inflicted far away in South Asia. He gives detailed examples of how authors such as Campbell, Jones and Burke tried to overcome the difficulty, but in the end the global possibilities of sentiment are blocked by the allure of domesticity and the sinister elements of the exotic. Rudd joins a cadre of scholars probing the limits of historical cosmopolitanism, testing some of the more facile claims for a global history and a global sensibility.' - Jonathan Lamb, Andrew W. Mellon Professor of the Humanities, Vanderbilt University, USA

'Andrew Rudd illuminates the nexus of sympathy connecting Romantic Britain to its newly-acquired empire in India, from the era of Hastings and Jones to Southey and Moore. This study of colonial affect will be essential reading for all scholars of Romantic orientalism.' - Professor Nigel Leask, Regius Professor of English Language and Literature, University of Glasgow, UK

'In Sympathy and India in British Literature, Andrew Rudd offers a finely chiseled analysis of the challenges that geographically and culturally remote India posed to British imaginative sympathy and traces the shifts in the object of sympathy between the cosmopolitan spirit of the late eighteenth century and the gothic imagery of the nineteenth. Close and insightful readings of texts from Edmund Burke and Sir William Jones to James Mill and Thomas Moore are set in a broad context that productively and convincingly brings into play an array of factors from aesthetics to colonial policy to the demands of the book market. An enlightening and rewarding read.' - Rosane Rocher, Professor Emerita of South Asia Studies, University of Pennsylvania